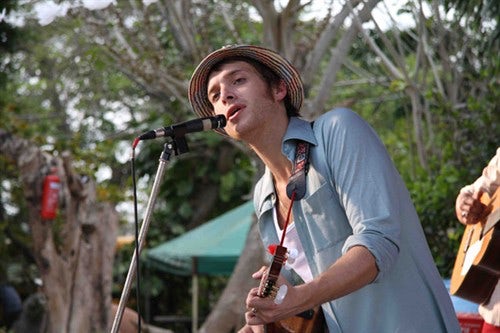 Its launch is being backed by a £1m television advertising campaign – the first TV ad since the confectioner was acquired by Kraft.

The album has been produced by Cadbury’s Glass and a Half Full label, which was behind classic ads such as Gorilla and Eyebrows.

It is called ‘Big Swap Songs’ and has eight tracks including an exclusive rework of Nutini’s hit ‘Pencil Full of Lead’, along with Ghanaian covers of a selection of tracks by artists such as Girls Aloud, Elbow and Goldfrapp.

The album’s launch will be supported by a new £1million TV campaign featuring Paolo Nutini himself, which will air for three weeks from today (19 February). The ad will air during a number of primetime programmes, including Dancing on Ice and Champions League and is the first TV ad screened by Cadbury since its takeover by US food giant Kraft. Its last Fairtrade ad was accused of racial stereotyping, but was not followed up.

Cadbury Dairy Milk fans can download a free copy of the album by going online and telling Cadbury what items they have swapped for items with the Fairtrade mark. Or, they can visit their local newsagents during the second week of Fairtrade Fortnight to receive a free CD. Additional content will also be available online including a video of the Pencil Full of Lead cover and a picture gallery.

Harriet Lamb, executive director for The Fairtrade Foundation, adds: “The album is an exciting and innovative way of encouraging people to take part in the Big Swap. Thumbs up to Cadbury’s for supporting Fairtrade Fortnight and offering this fun reward to people who swap one of their shopping items for Fairtrade to help farmers, workers and their communities in developing countries.”

The limited edition album aims to celebrate the partnership between Cadbury Dairy Milk and the Fairtrade Foundation and demonstrate Cadbury Dairy Milk’s continuing commitment to create thriving cocoa communities in Ghana through the Cadbury Cocoa Partnership, which has seen Cadbury invest £45m over 10 years to secure the sustainable future of cocoa farming in Ghana, India, South East Asia and the Caribbean.