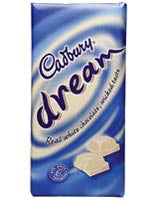 Cadbury is gearing up for the European launch of a premium white chocolate bar, to be called Dream.

The product will be launched in the UK at the end of January, backed by a £6m advertising spend through TBWA/London.

Dream is aimed at the adult market, and will be available in 200g and 49g bars, retailing at approximately £1.17 and 35p respectively. Marketing will emphasise the bar’s creamy taste, and sample bars will be given away with Cadbury’s Roses from late December.

Dream was launched this year in Australia and New Zealand. In New Zealand it has become one of the top five block chocolate brands, and has driven growth in the chocolate market as a whole, says the company.

This will not be the first time the name Dream has been used for a chocolate-related product in the UK. Halo Foods used to make a low-calorie chocolate bar of the same name, but this has been discontinued.

In the early Nineties, Bird’s Eye Walls teamed up with Cadbury to manufacturer a Dream ice cream.

This is the first significant launch from Cadbury since the Snowflake in 2000.

Easter eggs and a Creme Egg-style variant of Dream are also planned for next year.