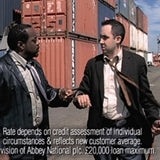 Speculation that Abbey is to axe its online banking service Cahoot as a separate brand has been fuelled after the company revealed that it has scrapped the internet bank’s independent use of ad agencies and that it will now rely on the parent company’s roster of agencies.

It has been suggested that marketing for Cahoot is to be phased out and that a halt has been called to marketing project work.

Speculation that Abbey would fold Cahoot into its main brand grew earlier this year when Cahoot’s managing director John Goddard and head of marketing Dave Mathews were also put in charge of Abbey.com, the bank’s online service. But the company insisted Cahoot would survive as a separate entity.

The company says a new marketing campaign was launched in May under the theme of “better rates, simpler products.” It claims the campaign includes a combination of press, online, tube and radio ads.

A spokesman says/ “Cahoot uses Abbey’s roster of agencies for marketing and advertising. However we occasionally use the services of other agencies on an ad-hoc basis for project work. Due to ongoing contract negotiations with third parties we cannot discuss any current creative project work.”

The online bank has some 650,000 customers, though it is understood that acquisition of new recruits has slowed substantially.