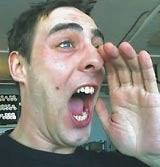 As the UK’s trade balance slips ever further into the red (a topic upon which Gordon Brown is uncharacteristically quiet) it is good to know that these shores still produce one major export: idiots.

The latest berk to storm foreign shores, known only as “hayesfloyd”, is now resident in Brooklyn, New York. In a clever twist on the ancient art of the Town Crier, hayesfloyd has auctioned his voice on Ebay, offering to shout the successful bidder’s brand name as loudly as possible, wherever he may be, every 15 minutes for a week, which presumably means the twerp will get no sleep for seven days. The Diary feels sorry for his neighbours.

So the residents of New York are about to be treated to 672 yelps of “Halls Fruit Breezers!” – rather aptly, a brand of throat lozenge.