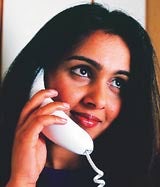 Comparing the different price tariffs operated by each telephone provider is as confusing – and uninteresting – as fathoming the interest rates on mortgages and savings accounts. Rather than making it easier for consumers, operators more often than not complicate the matter further.

But BT, the largest fixed-line operator with a 70 per cent market share, claims it is bringing some simplicity to the market with a new pricing structure for its 10 million BT Together customers.

While claiming to offer a more easily understood pricing scheme to consumers, it is clear BT is reacting to a raft of new entrants that have broken into the market. “The new charges could kick off a price war,” says BT Retail’s managing director for the consumer division, Angus Porter. “And it may cause some that had planned to enter the market to think again.”

The introduction of Carrier Pre-Selection in December 2000 gave customers the right to choose which telecoms provider they want to route their local, national, international and mobile calls. As a result, the market was opened to non-traditional telecoms operators, such as Argos, Powergen, and British Gas Communications.

Not surprisingly, the new rules have had an impact on BT’s share of revenue in the residential telephone market (source: Oftel), which has fallen continuously until the last three-quarters of this financial year. BT now hopes to retain its market position, without damaging profitability, though it is not looking for revenue growth in this sector.

“BT wants to stabilise its market share as far as the number of customers is concerned, but at the same time it wants to increase the amount it gets from those customers,” says Ovum senior analyst Jan Dawson. BT will seek revenue growth in the broadband and mobile services sectors.

Until now BT has done little to retaliate to the new competition and, in particular, to providers claiming to be cheaper than BT in their advertising. “BT has finally snapped and introduced a pricing scheme so that nobody can say it’s cheaper,” says Dawson.

BT’s Porter adds: “We have been getting gradually more aggressive [in its marketing]. You can’t rely on the competition to be fair when advertising their services, so we’ve taken the stance that we need to tell the story honestly.”

Naturally, none of its competitors agree. Even the Consumers Association put out a statement that said: “It’s in BT’s interests to claim that competition is delivering for consumers while holding onto three-quarters of the telephone market. But the fact is that these changes aren’t as radical – and the savings are not as big – as BT would have us believe.”

Cable companies NTL and Telewest Broadband pose the biggest threat to BT, with a combined market share by revenue of 17 per cent. When asked about BT’s new pricing structure, both NTL and Telewest highlight existing call plans they have had in place for several months, or in Telewest’s case, two years. “BT’s offering really isn’t as radical as it claims to be,” says Sarah Wood, head of marketing for telephone and TV at Telewest. “And its focus on the fact that consumers want clearer and simpler pricing is something we’ve known for years.”

NTL, which has about 11 per cent of the market, also points out that for callers not using BT’s call plans – 50 per cent of its customers – they will have to pay its standard tariff of 8p per minute for a daytime call, compared to NTL’s and Telewest’s 3p-a-call rate. However, unlike BT customers, cable customers have to pay a connection charge of 5p to 6p for each call they make, except on call packages.

Another rival operator, Centrica-owned One.Tel, has also responded scathingly to BT’s actions. “BT couldn’t have been more misleading if it had tried,” claims marketing director Mike Holliday-Williams. “As a headline it looks simpler, but minimum call charges have gone up and customers are losing their call allowance [of free calls worth &£2.40 month for all BT Together customers].”

Carphone Warehouse, the latest entrant to the market following the launch of its consumer fixed-line service, Talktalk, in February, has been particularly aggressive in its positioning against BT. At a recent analyst’s meeting, chief executive Charles Dunstone said the company’s aim was “Beating BT Together” and has even pledged to give customers &£500 if they can prove that Talktalk won’t save them money over BT.

The day before BT made its announcement, Carphone Warehouse reported that it was collaborating with Sainsbury’s to provide fixed-line telecoms services from this summer. Sainsbury’s move into the market is hot on the heels of Tesco, which announced Tesco Telecom in February. Its service will launch in June and aims to be “very good value and easy to use,” according to a company spokesman.

Although the market has been opened up to competition, the number of new players has, ironically, made it harder for consumers to compare each service.

In other industries where confusion marketing reigns, regulation has been used to introduce some simplicity. In the financial sector, for instance, the Financial Services Authority recently fined a company for the first time for running misleading advertising. Telecoms regulator Oftel, however, may lack the necessary clout.

“Oftel doesn’t have any authority to interfere with price as long as companies remain within our regulatory framework,” says a spokeswoman. “You can’t fine companies under the Telecommunications Act, but you can under the Competition Act.”

BT’s Porter admits that its new pricing structure will not provide the definitive solution for a complicated industry: “We have simplified the tariffs, but it’s still a difficult market,” he admits. In the meantime, consumers will have to look to websites such as uswitch.com, which compares prices of suppliers, or simply rely on their nous to cut through the tariff quagmire.

Tesco has announced annual profits up 13 per cent to Â£1.3bn, and an increase in operating profits of seven per cent for the year to February 22.

Granada Channels has struck a six-figure deal with the Budget Group to sponsor all weather reports on the ITV News Channel.

The latest ‘hard-nosed’ research from the Radio Advertising Bureau shows how effective radio advertising can be in driving sales, says Phil Reddaway