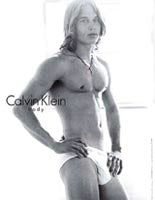 A Calvin Klein ad that featured male model Travis Fimmel wearing only Calvin Klein underwear has been cleared by the Advertising Standards Authority (ASA) after it rejected claims that the ad was indecent.

Complaints to the ASA claimed the poster was indecent, sexually suggestive and demeaning to men. But the ASA has ruled that the ad, which caught the imagination of the national press because of Fimmel’s physique, was not explicit and was unlikely to cause widespread offence.

Last month an 18m high version of the poster had to be removed from London’s Oxford Street because the AA said it caused traffic gridlock as women slowed to look at the poster.

An ad campaign for Dolce &amp; Gabbana showing a man and a woman in their underwear has also been cleared by the ASA this week despite 47 complaints.

The ads, which featured a man and a woman facing each other and holding the waistband of the other’s pants, were also considered to be appropriate in the context of the ads.