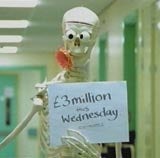 Louis will take responsibility for the good causes advertising campaign, created by WCRS, which is scheduled to run until 2004. She will also communicate with the lottery operator’s agencies. Louis was part of the team that moved Orange’s advertising out of WCRS into Lowe Lintas in 2000.

Louis will take up her post on July 14 and will report to marketing and communications director Jo Kenrick.

Louis left her position as head of brand communications at Orange at the end of February, following a marketing team rejig and the appointment of Solomon Trujillo as chief executive. She helped to launch Orange nearly a decade ago.

A Camelot spokeswoman says: “Nicole will use the experience she gained at Orange to take forward Camelot’s advertising.”

Camelot’s advertising has rarely been regarded as successful, with widespread dislike of its £70m “Live A Lotto” relaunch featuring Billy Connolly, and a tabloid outcry over its support for unpopular projects.

Louis is expected to play a key part in helping return Camelot to growth by its target date of 2004. The National Lottery operator unveiled its recovery plan in May. The plan includes a penny raffle to support Britain’s 2012 Olympic bid, a European lottery, a daily draw and around 30 scratchcards over the next 12 months (MW May 22).