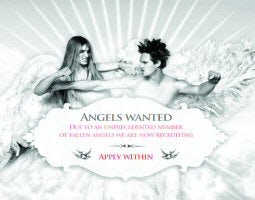 The Diesel Heaven campaign was developed by the company’s long-standing digital agency Airlock and builds on the brand’s previous activity around guides for successful living.

This time the action moves to the afterlife. The campaign includes a series of rich-media overlays and video ads that feature a Diesel Heaven guide, Delia Evans, outlining the activities you could expect to experience in Heaven’s only seven-star hotel. There is also an online angel recruitment campaign to make up for all the fallen angels that have been corrupted by Diesel’s presence.

A blog reports on what is described as the worldwide phenomenon of fallen angel wings.

The first runner-up for the Creative Showcase award, sponsored by MSN, is the Say Yes campaign for Virgin Money, developed by Glue London. The online element of the campaign for the Virgin credit card is based on the “life is more exciting when you say yes” premise and features a number of simple and rich-media ads, and e-mail marketing.

The second runner-up was Tribal DDB’s Marmart campaign for Marmite, promoting the spread’s squeezy bottle. The campaign encourages kids to draw on their toast with the squeezy bottle, and upload pictures to an online gallery. It is supported by online ads and an exhibition in a London art gallery.