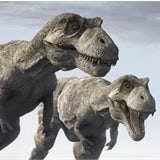 The latest winner of the IAB Creative Showcase Awards is the Prehistoric Park campaign, developed for ITV by digital agency Play.

The campaign used a mixture of overlays and expandable buttons and skyscrapers to promote the docudrama series to a target audience of families with 7- to 14-year-old children.

The campaign avoided making grand claims about the technical wizardry of the animation, concentrating instead on the most dramatic element of the programme – prehistoric creatures interacting with modern life.

Play created its own CGI models of the creatures featured in the show, including a Tyrannosaurus Rex and a Nactosaurus, and used them to interact with different elements of the Web page. It also developed three “cyberpets”. These animated dinosaurs could be downloaded onto the desktop of a computer where the owner then had to feed them and play with them in order to keep them alive. Taking the campaign offline, the cyberpets were burned onto 80,000 CDs which were given away to children at cinemas showing the ad for Prehistoric Park.

The two runners-up spots for the awards, which are sponsored by MSN, were both for Coca-Cola, although the campaigns were created by different agencies.

The first runner-up was AKQA’s “Rooney” can campaign. The short film of the footballer kicking a Coke can was seen by over 5 million people in the first two weeks of its release, just ahead of the FIFA World Cup.

The second runner-up was from Glue London, a campaign for Coca-Cola Zero, based on the theme “Great things in life without the downsides”.