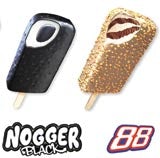 Swedish civil rights lobby group the Centre Against Racism (CAR) has attacked GB Glace for a marketing campaign supporting its new Nogger Black lolly. The product is a variant of the company’s 28-year-old Nogger lolly, and features a vanilla core covered in liquorice toffee ice cream, encased in a salty liquorice shell. It is being marketed with a poster campaign featuring graffiti-style graphics.

The CAR says that while the name and the product itself are not racist, associating them with graffiti is a clear reference to Black culture and hence racist.

Meanwhile, the Anti-Discrimination Bureau in the Swedish city of Malmo has attacked GB Glace’s 88 lolly on the grounds that 88 is neo-Nazi code for Heil Hitler (“h” is the eighth letter of the alphabet). The 88 lolly was launched in 1964.

The uproar has echoes of the outcry in 1998 against Wall’s new global logo for its ice cream operations. The logo – a heart formed out of the word Wall’s – allegedly resembled the word “Allah” when viewed upside down. Unilever had to have the design tweaked to avoid offending consumers in Middle Eastern markets.