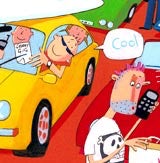 Gone are the days when students were a downtrodden and readily-mocked element of society, ridiculed so well in hit Eighties TV comedy The Young Ones. Then, the image of the typical male student was one of lonely bedsits, The Smiths and a budget that rarely extended much further than the next Pot Noodle and copy of Viz.

Today, the situation couldn’t be more different. The student market has become a highly sought-after demographic, considered by many brands to be cash rich and therefore highly exploitable. It is certainly a far more dynamic sector than in the past, a point picked up on by Craig Elston, planning director at Alphabet Advertising.

“I was talking to a student the other day who was in a car on her mobile. When I was student I used to get the bus and we had a pay-phone in the flat,” he says.

Traditional student marketing has typically centred around freshers’ week and other campus activity. This now looks a bit passé in an age when a high percentage of students have mobile phones and surf the Internet. That said, the one advantage direct marketers have is that students tend to be geographically concentrated around campuses, and therefore tried and tested on-site methods will always have their place.

With this in mind, postcard advertising company Boomerang Media is able to reach nearly 94 per cent of UK students by distributing free postcards through student unions to 140 universities/ higher education colleges.

Campus cards are being used by an increasing range of advertisers targeting 18- to 24-year-old students. Clients which have used this medium as part of recent campaigns include Red Bull, Ben &amp; Jerry’s Ice Cream and The Guardian.

Sharon Mason, marketing manager at Boomerang Media, argues that postcards are not only cheaper than other forms of direct marketing, but are also responsive and an effective means of raising brand awareness. “If Hawaiian Tropic, for example, did a massive poster campaign, it couldn’t really know how well it was working, whereas a postcard with a response mechanism is immediately measurable,” she says.

Events such as music festivals also have the obvious advantage of being well-attended by students. This is something Ericsson recognised recently by sponsoring the Homelands music festival earlier this year. Its involvement was part of a far-reaching campaign, as Ian Millner, managing partner at youth marketing specialists Iris, explains. “Ericsson’s involvement was part of a long-term strategy about being relevant to the youth market and using involvement in these events to drive behaviour.

“When it comes to mobile phones, the role of the phone for students is arguably functional, so they’ll make do with a &£9.99 one. But we recognise that, in two or three years’ time, they will want a certain type of phone and this strategy might establish that preference. It’s a deferred selection process.”

Millner believes, however, that music festivals and campus activities are not the best options for traditional student marketing. “Festivals and campus events provide opportunities for underground activities like dance clubs, but for those brands which like the welcome packs route – where brands provide samples of their goods – impact is likely to be low,” he says.

“Students’ response to these packs tends to be: ‘I’ll take the freebie and run.’ It does nothing to influence behaviour or preference. The same goes for booze promotions – it’s a waste of money as people are buying the product because it’s on promotion, not because of the brand.”

Millner believes a far better approach is to try to understand the social dynamics at universities. There are some fairly stereotypical segments in most student cultures, he argues. For example, you’re likely to find a sporty crowd, weird crowd, swotty crowd and so on.

“It’s about targeting the right segment with your brand and making sure opinion formers in those social groups are talking about you and using you,” he says.

Elston agrees that marketers should immerse themselves in student culture before trying to target this sector and that marketing activity therefore needs to be set in the context of students’ lifestyles. He believes a key aspect to understanding the market is the fact that today’s students have grown up during a communication revolution with digital TV, the Internet and mobile phones being part of their everyday lives. This is also part of the problem for marketers: students are being bombarded on all fronts with various marketing messages. But Elston suggests that brands need to embrace all these marketing channels if they are to communicate effectively with students.

“Whether the promotion is something they’re pulling off the Web, a DRTV ad or something in a Student Union goodie bag, delivery of a consistent brand experience as well as a response mechanism at every point of contact is vital to this market,” he says.

A further dilemma is the fact that there is less confusion these days over whether or not something is a student brand. In the Eighties, it was all Doc Martens and Heinz Baked Beans. Now, there’s far more fragmentation, partly due to the increasing size of the student population.

Students are also, typically, moving from a family environment to becoming independent consumers for the first time. This is a tricky transition because it straddles the teenage and adult markets. “It’s a demographic group which is essentially a misnomer,” says Mark Ritson, assistant professor of marketing at the London Business School.

In the past, a way to exploit the student market had been to try to make brands “cool”, but many marketers now believe this is a dangerous ploy.

Fiona Blades, head of planning at Lowe Direct, says: “If you try to build an aura of cool you’ll probably be out of date before you start and you’ll get it wrong. You don’t start from thinking cool, you start from thinking about something that would be clever and appealing and try to pick up on interests they have. Get into their mindset, how they’re interacting with the brand and take it from there.”

Added to this, coolness, by its very nature, demands a exclusivity, which scuppers a lot of conventional direct marketing. Millner says: “The process through which you make something cool is quite odd. There needs to be a certain exclusiveness, which counts out broadcast media. The more exclusive something is, the cooler it becomes, which is an interesting paradox when it comes to the adoption process.”

With students using the Internet so much, it seems obvious to assume it is the best vehicle for companies to get their messages across, particularly by e-mail.

However, Blades believes students are becoming scornful of the medium. “Work that we’ve done suggests e-mail isn’t the best way to target students because they get bombarded by it.

“The danger is that e-mail can sometimes look like no thought has gone into it.” She believes students prefer to receive direct mail because it is perceived as being far more personal.

Millner, however, argues that e-mail can be a successful direct marketing tool. But if it is to work, he says, it must have a high entertainment value.

He suggests an amusing or interesting attachment incorporating the brand – such as a game, screensaver or desktop graphic – often works well.

Ritson says students like to have an element of control in the way companies market to them. “This is a group that likes to do things to marketing rather than have things done to them,” he says.

A clear danger for companies is to end up being over-positioned in the market with a brand which is seen as being patronising. Students are in one of the tightest fashion cycles and developments take place very quickly, so the idea that a mass marketer can benefit from creating a trend before things move on is unlikely.

Instead, marketers need to realise the best way forward is to pick up on existing trends, reach into the mindset of students and then use marketing far more as a magnifying glass rather than as something that creates trends.v