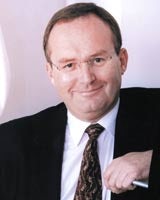 Marks &amp; Spencer (M&S) may be back on track, but it is still a long way from spring 1998, when the company notched up record pre-tax profits of £1.16bn.

The company was then so sure of its position as a top UK brand, it did not even have a marketing director. A year later and M&S was in such dire straits that its pre-tax profits for the year ending March 1999 had halved to £546.1m.

Desperate to impress the City, the company recruited Woolworths former head of marketing Alan McWalter as group marketing director, the first appointment of an outsider to the M&S board for 14 years.

The City responded to the news, which coincided with the leak of poor internal trading figures, with a drop in M&S’s share price. According to one analyst they were expecting a marketing whizz kid.

Three years later, with pre-tax profits increasing again, veteran marketer McWalter has been squeezed out of M&S, following a reshuffle that removes marketing from board level. Luc Vandevelde will continue as chairman, but has handed the chief executive role to Roger Holmes, former managing director, UK retail.

An M&S spokeswoman says: “As a business in recovery it was right to have a marketing function on the board, but now that it has stabilised it warrants a structure driven by the three profit centres of the business.”

To reflect this, the new board incorporates the heads of clothing, financial services and food.

But one City analyst says that McWalter, who was appointed by former chief executive Peter Salsbury, was “like a fish out of water” following the arrival of Vandevelde and Holmes in 2000. An insider also claims that there was personality clash between McWalter and Holmes.

McWalter denies this and says he “was instrumental” in bringing Holmes to M&S, having worked with him at Kingfisher, and that he received “fantastic support” from Vandevelde.

McWalter maintains that he knew there would be no place for marketing on the board under the new structure and now plans to spend “time with his family,” and think about how to put his 30 years’ marketing experience to good use.

External marketing manager Jude Bridge will head marketing on a new operating committee below board level until a marketing chief is recruited.

Earlier this year, M&S recorded its first increase in annual pre-tax profits and UK retail sales since 1998. For the year ending March 2002 profits were £335.9m, up from £145.5m the previous year and UK retail sales increased to £6.7bn compared with £6.3bn the previous year. The financial services arm, although up on 1998, shows signs of suffering difficulties, with turnover down from £350.8m last year to £363.1m. However, the company is investing £35m in a combined loyalty and credit card, which it hopes will reverse the division’s fortunes. Figures for the retail business continue to look promising, with the latest trading results for the 14 weeks to July 6 showing an increase in UK sales of 9.1 per cent on last year.

An M&S spokeswoman says that McWalter has established a marketing department that operates across the business, helping to ensure that the customer is at the forefront of all developments, and that the M&S brand stands for “making aspirational quality accessible and available to all”.

Analysts have mixed views about the effect that its £20m ad budget played in reversing the decline. Mintel senior analyst Richard Perks says that M&S lost sales not footfall, because its products did not live up to consumers’ expectations.

Recognising that customers were not being offered the kind of products they expected, M&S improved its ranges, in particular clothing. Marketing initiatives and the introduction of lines such as Per Una have generated a great deal of PR coverage, but not all of it positive. McWalter’s first attempt to woo customers with a television and outdoor branding campaign – created by Rainey Kelly Campbell Roalfe/Y&R, featuring a naked size 16 woman running up a hill shouting “I’m normal” – attracted a barrage of criticism. McWalter now says the campaign “was ahead of its time”.

Subsequent press ads for the Perfect range, and the Christmas Magic &amp; Sparkle TV campaign, have met with praise for their attractive execution and their ability to encapsulate what the M&S brand stands for.

But City retail analyst Matthew McEachran at Investec Securities is not alone in criticising M&S’s “exclusively for everyone” strapline as being “a contradiction in terms”. However he says: “The brand is more visible and the branding of ranges within the stores has also helped.”

Apart from the Per Una joint venture with George Davies, which appears to have attracted younger shoppers, and the now more affordable Autograph designer range, M&S has also developed a Blue Harbour clothing range for men, and Classic items for women. There are also new ranges of clothing for larger women, children and a new sportswear range – using the newly acquired brand View From – that are about to hit the stores. Outside the main stores, M&S is also developing a standalone food retail chain called Simply Food, in addition to a homeware chain.

Branded building blocks appear to be in place, but some say that McWalter and Vandevelde are stepping back at the right time.

Vandevelde warned last week when the latest trading results were issued: “We were trading this quarter against weak comparative sales last year in clothing and, looking ahead, our comparatives become progressively more challenging.”

Analysts doubt whether M&S will ever achieve the profits seen in its heyday. Holmes’ and Walter’s replacements will have to work extremely hard if they are to prove observers wrong.