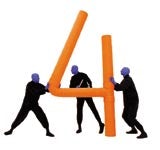 Speculation over the possible sale or break-up of French advertising group Havas gathered pace last week, after it announced its withdrawal from the $300m (£160m) advertising and media buying pitch for one of its largest global clients, Intel.

The loss is estimated to amount to three per cent of Havas’ total revenue and almost £15m in profits worldwide.

The world’s sixth-largest advertising group comprises three main units: advertising networks Euro RSCG Worldwide and Arnold Worldwide Partners, plus Media Planning Group (MPG). It has been under siege ever since it was beaten by WPP Group’s $1.5bn (£800m) bid for US rival Grey Global last year. French corporate raider Vincent BollorÃ©, who was opposed to Havas’ attempt to snap up Grey, has built up a 20.2 per cent stake in the group. BollorÃ© has kept the market guessing about whether or not he will make an outright play for the French ad company.

Without doubt, the eventual loss of Intel has narrowed the options for beleaguered Havas, but the future of the group remains far from clear. Speculation suggests that BollorÃ© might become a long-term investor in Havas, having pooled his shares in the company in a new entity called BollorÃ© MÃ©dias Investissements. He has also asked for two seats on the Havas board and is said to have plans to install former Havas boss Pierre Dauzier as head of a new supervisory board.

Although BollorÃ© has publicly ruled out a bid for Havas, reports that he has raised â‚¬200m (£140m) in cash from his holding through a structured financing deal with SocietÃ© Generale have raised doubts about his intentions. On top of his own 20.2 per cent stake, it is understood BollorÃ© has the support of the Rodes family, MPG’s founders, who control 2.6 per cent of Havas’ stock, and the Spanish March family, whose investment vehicle Corp Alba also owns a significant stake via an investment in MPG.

Ever since BollorÃ© began building up his shareholding in Havas last summer, there has been much speculation over whether he or one or more of rival agency groups Publicis Groupe, WPP and Omnicom will mount a takeover or break-up bid.

But no single player has yet built up a 33 per cent stake – the point at which, under French law, a shareholder must proceed with a takeover bid – or indicate that they intend to mount a formal takeover attempt.

Part of the reason for this may be that there are hurdles standing in the way of at least some of the contenders. Publicis, regarded by many as the obvious candidate to make a move, does not appear to be without its own problems. Bob Willott, editor of Marketing Services Financial Intelligence, says: “Though the French like to stick together, the problem with a merger with Publicis Groupe is Publicis’ weak balance sheet. It is not very well documented that Publicis has been heavily burdened with debt for some time.” Other industry experts point to major client conflicts. Havas handles Peugeot and Danone, while Publicis has Renault and NestlÃ©. Havas chief executive Alain de Pouzilhac has himself rubbished reports about a merger in the French press, saying that some â‚¬500m (£350m) in revenue could disappear as a result.

One rival advertising insider says, however, that “misplaced” Gallic pride might lead the French government to leap to the defence of Havas, in an attempt to avoid a Cordiant-style debacle. “I suspect some kind of deal could be carved up with Publicis in order to create a big French network,” he adds.

WPP, meanwhile, has its own problems, says Willott. Its purchase of Grey has come under scrutiny by the European Commission. Even if it does allow WPP’s acquisition of Grey to proceed, the EC would surely raise competition issues over any bid to buy Havas.

Some observers say Omnicom is also in the frame to buy Havas. One advertising expert claims that Jean-Marie Dru, president and chief executive of Omnicom-owned TBWA/Worldwide, is helping Omnicom to prepare a bid for Havas. “Not only BollorÃ© has approached Dru to buy him out of TBWA, de Pouzilhac has also been in touch,” he adds.

Another industry insider suggests that Havas will only appeal to rival advertising groups if it is broken up. “Media Planning Group, which is strong in France, Spain and Latin America and at best top of the second division in markets such as the UK, could be attractive to WPP. Euro RSCG is strong only in France and Arnold is simply an American boutique agency. Havas has failed to knit together its various agencies to build one powerful advertising brand,” he says.

Critics point out that de Pouzilhac has racked up failures ever since he paid over the odds to buy Arnold’s holding company Snyder Communications for $1.5bn (£1bn at the time) in 2000 and then a year later lost out to WPP in a battle for Tempus. “Since then, the company has turned from a powerful advertising group into some kind of turgid financial group,” says one expert, pointing towards the sliding share price over the past five years.

Trying to reverse its fortunes, Havas restructured two years ago, ditching a two-network structure – Euro RSCG and Arnold – in order to deliver “integrated services” (MW April 14, 2003). While Havas’ global clients were to be served by Euro RSCG, Boston-based Arnold was positioned as a creative alternative operating only in key markets. In the UK, Euro RSCG was merged with former Arnold agency Partners BDDH, while WCRS bought itself out. But in 2004, the group underwent further changes, resulting in the sudden retirement of long-serving Euro RSCG chairman and chief executive Bob Schmetterer, who was particularly close to Intel. He was replaced by McCann Erickson “reject” Jim Heekin.

“The problem with de Pouzilhac is that he lacks the ability to get into bed with the right people. Hence the appointment of Heekin and subsequently Ben Langdon to run Euro RSCG. On a macro level, Havas’ weakness has always been its reliance primarily on the US and Europe for its revenues – its under-exposure in Latin America and Asia has made it tougher to pull in global new business,” says a source.

This week, de Pouzilhac publicly defended his company after it pulled out of the Intel pitch, giving assurances that the loss would not derail Havas’ financial recovery and saying that it had been offset by other wins for the group. In November last year, Havas reported that its third-quarter revenue was up 2.1 per cent on the same period in 2003, to â‚¬338m (£237m). The performance compared favourably to the previous two quarters, which had each seen organic growth of less than one per cent.

But Havas is also battling to retain the $500m (£270m) Volkswagen media buying account in the US. Media Planning Group is pitching against rival roster agency MediaCom, which handles VW’s planning and buying in markets outside the US.

With little good news for Havas at the moment, Euro RSCG’s recent £45m LG Electronics win across Europe has provided a much-needed boost to morale. But this new account alone is unlikely to be enough to keep the vultures at bay and Havas could find itself in the clutches of one of its rivals or under new management by the end of this year.