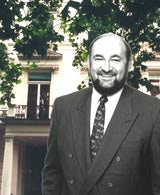 Cordiant Communications has appointed former food group chief David Hearn as chairman and chief executive of its Bates Worldwide subsidiary in the hope that this gamekeeper-turned-poacher will help the company bag some big business.

Poor company results are expected imminently after a series of profit warnings and some big account losses. Bates USA West recently lost the media account for Hyundai Motor America and is now defending the creative account, estimated to be worth &£112m.The division is also losing the contract for the Joint Recruitment Advertising Program at the Department of Defense. Bates UK has not been faring well either – in recent months it has lost the media planning business for Woolworths to Zenith Media (MW February 28) and there is speculation over whether it will retain the retailer’s creative account. It also lost the &£3.5m Center Parcs UK account to Burkitt DDB (MW January 17). Bates Worldwide’s last recorded billings stood at $10bn (&£7bn) for 2000.

UK-born Hearn’s last position was as chief executive at Australasian branded food manufacturing company Goodman Fielder, which owns brands such as the Uncle Toby’s range of cereals. Hearn oversaw restructuring to focus on the core business, shedding divisions such as the Davis Gelatine Company.

Prior to that, Hearn was chief executive of United Biscuits Snackfoods Europe and a main board director at United Biscuits. He began his career as a marketer, working at Procter &amp; Gamble, SC Johnson and Sterling Health before becoming managing director of Del Monte UK, where he worked on the “Man from Del Monte” campaign with McCann-Erickson Advertising. Del Monte was bought by RJ Reynolds, which merged with Nabisco, heralding a run of owners for the division. Altogether, Hearn worked under six owners during his six years with the company, including private equity firm KKR and Pepsico. During this period he worked his way up to vice-president of Pepsico’s European snack foods division.

Hearn enters a restructured Bates Worldwide and will be in charge of more than 180 offices in about 80 countries, in addition to overseeing the marketing services division, 141. Observers say that there is uncertainty over the whole future of Cordiant, like Grey one of the last single networks with global reach in a fast-consolidating industry. Publicis’s proposed takeover of BCom3 forms the most recent example. Cordiant is a prime target for acquisition for global networks such as Havas Advertising or Publicis, although it is regarded as overpriced. Conceivably, Cordiant could be broken up at the right price – one of its main assets is a 25 per cent stake in Zenith Optimedia. In addition to Bates and 141, Cordiant also owns large chunks of Germany’s Scholz &amp; Friends and South Korea’s Diamond Ad, plus further marketing communications companies.

Hearn is not the first company executive to cross the floor from the client world to advertising. The most high-profile is Saatchi &amp; Saatchi Worldwide chief executive Kevin Roberts, who joined from New Zealand brewery Lion Nathan and was previously president and chief executive of Pepsi-Cola Middle East. There is an interesting link between the two appointments, as Cordiant demerged from Saatchi &amp; Saatchi in 1997. One European agency director points out that Roberts proved his worth in sustaining the Saatchi brand after the departure of the founding partners – and managed to get a good price for the company from Publicis.

Cordiant chief executive Michael Bungey says Hearn and Roberts share similar backgrounds. They both have high media profiles and come from companies where a high volume of advertising has been important.

Bungey adds: “For me, the most important thing is that Hearn has a good management track record. He is good at decision-making, good at action and has a lot of energy.”

Hearn also has staying power. He arrived at Goodman Fielder in September 1995, after the company had gone through four chief executives in six years, and remained in the post until leaving “by mutual agreement” in October, with two years left to run on his contract. The company began to falter towards the end of his tenure and posted a loss of A$78.3m (&£29.2 m) two months after Hearn’s departure.

Agency heads and analysts believe that the appointment of an “outsider” is a positive move, given Bates Worldwide’s current woes. It sends out a strong message that the company is serious in its restructuring and the fact Hearn has accepted the post should impress potential clients. As Lorna Tilbian, analyst at Numis, says: “It helps Cordiant’s position. An executive of Hearn’s calibre would not sign up without carrying out some due diligence on the company.”

Cordiant’s share price rose last week, but it is still a long way off the 400p high of April 2000. It rose to 93p the day before Marketing Week went to press.

One agency man-turned-marketer says that in the wider world of commercial business, ad executives are seen as “fluffy”. This is partly because they don’t carry the can for the advice they give – results-based payment is still a rarity. He says that an appointment from outside the industry should bring with it the disciplines of regular accountability and “intellectual rigour”, adding that Hearn will be “extremely comfortable” with big investment decisions.

Abbott Mead Vickers.BBDO board account director Andrew Hopkins worked alongside Hearn at Procter &amp; Gamble and handled the account when Hearn was managing director of Smith’s Crisps. He says that Hearn is “larger than life” physically and charismatically and can motivate people.

He adds: “He is very well suited to a services business and has an unusually good grasp of the advertising process, understanding the creative and media industry incredibly well.”

Hearn is unlikely to suffer too much of a culture shock, but, as the aforementioned ad man-turned-marketer points out, he is now in a service industry and will have to get used to being reactive: “No matter how senior he is, Hearn will still be at the beck and call of the chief executive of Bates’ biggest client.”

Hearn retorts that, as a food company executive, he had retailer clients and was used to fulfilling their requirements.

Observers stress that Hearn will have his work cut out, as Bates Worldwide does not benefit from the global critical mass of its consolidated rivals and is not regarded as a hotbed of creativity. One director says that Hearn needs to form a strong new business team and identify key client relationships urgently.

Bungey says Hearn’s most pressing task is to get new business in North America where “we have a more chequered history”.

If potential clients feel that they can have a focused, business-minded dialogue with someone who understands their concerns as a customer, the company believes it will be on the way to reversing its fortunes – and making Cordiant a more attractive takeover proposition. Hearn denies that his job is just to turn Bates Worldwide into a saleable concern and then to walk away with a sizeable pay-off. He says he is not on a short-term contract and adds: “I’m here for the duration and will take my chances like everyone else.”

Sunday’s family-oriented market is no place for a paper with a core ‘Star’ offering, and extending it will only result in a bruising from the NoW

At last week’s TV 2002 Conference, the TV industry was told it had to adopt a new approach to win advertisers back to the medium.