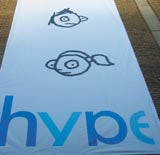 Hewlett-Packard no longer sees itself as a solid, reliable printer company aimed primarily at business. According to the company, or HP as it now wishes to be known, it is a young, robust, creative market force that is consumer-friendly and has the arty iMac generation in its sights.

And with its latest underground HyPe campaign using a London art gallery and several huge printers, the IT company is hoping to take its biggest bite yet out of Apple’s creative core.

But has this turnaround from a geeky computer company to worldwide lifestyle brand worked? And what is the main reason for the rebrand in the first place?

About 15 years ago, HP was not a consumer brand at all, but now consumer products are worth &£22.6bn to the company annually, making up 30.7 per cent of its total business. Despite this, some experts believe it still hasn’t shed its boring, geeky image.

Following its takeover of Compaq in 2002, HP now rivals IBM in size and provides not just personal computers and printers, but IT systems for multinational organisations. After the merger it decided to put more emphasis on its global “Invent” identity, originally launched in 1998 when Carly Fiorina took over as chief executive. For Fiorina, embracing the consumer market was the best way forward, as computers become a bigger part of peoples’ lives.

Since then, the HP Invent campaign has mainly taken a partnership approach with other companies using the “Intel” insert strategy, for instance the Bang &amp; Olufsen, Amazon and National Gallery campaigns. HP’s 2003 UK marketing budget was &£11m. For its marketing, it mainly uses US agency Goodby Silverstein &amp; Partners, with the ads adapted for the UK by Publicis.

In December the corporation launched its biggest global ad campaign to date, spending &£7m in the UK to promote its digital photography range.

“After we took over Compaq we took a step back and realised that people saw HP as primarily a printer company and Compaq as principally a PC company. They didn’t see the breadth of what we did,” says HP enterprise marketing director Ian Curtis.

“In the past, HP has mainly been seen as a solid and reliable company but frankly never as fresh or modern, which is how we wanted to rebrand ourselves. This is now shown through our innovative PC and printer designs and our whole outlook. We are no longer advertising the products themselves, but what they can enable people to do.”

With its new UK-specific HyPe campaign being carried out by Publicis, HP is targeting the creative community normally associated with Apple. The challenge was to incorporate HP into the creative process, and Publicis came up with the idea of an art gallery called HyPe, with the work being provided by art and design students, graphic professionals and emerging film-makers. HP would provide the means for them to bring their work to life.

The gallery opened on January 22 at the Truman Brewery in London’s Brick Lane. It was virtually empty, with two thousand feet of blank walls, a row of HP large format printers and a bank of HP mobile projectors. Artists and film-makers were then invited to turn up with an original digital picture or short film on disc, created around the theme of being inspired by a word or phrase containing the letters H and P. Technicians would then print and hang or project the work onto the blank walls using the HP equipment.

Erin Heath, the HP regional account director for Publicis, says: “The HyPe campaign has managed to hook into the UK creative environment, creating a relationship with people that other more ‘by-the-book’ campaigns would not have been able to do.

“The whole idea behind it is to empower people with what the technology can do for them. It has been a real challenge to get this across.”

When it comes to printers, HP is the UK market leader with a 35.3 per cent market share, according to 2003 third-quarter figures from Gartner Dataquest. In the PC market, HP is in third place, with a 12.5 per cent share of the UK market.

Lauren Henderson, a director of strategic branding consultancy Futurebrand, says: “The problem with HP is that people still see it as a grey, boring, product-based company with which they have no emotional connection, like they would with Apple or Dell. It does have an uphill struggle, especially after merging with Compaq, another product-oriented company.

“Innovative campaigns like the HyPe gallery certainly work in HP’s favour and I believe they are heading in the right direction with the Invent campaign, but they haven’t managed it yet. To change perceptions of a brand is a long, drawn-out process, and only time will tell.”

Curtis describes HP as a constantly evolving company. Recently it struck a deal with Apple to create a digital music player based on iPod and it has been making substantial moves into the plasma television and projector market.

He claims this year will see HP spending another &£11m on its UK marketing, as the battle to change perceptions continues. But will it ever be able to shed its grey, product-based image?