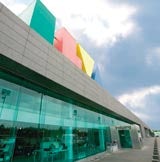 The grim sheds that pass for home furnishing shops are about to get a makeover. Danish furniture retailer Ilva plans to bring a chain of 120,000 sq ft stores with stylish interiors, crafted fittings and elegant lighting to retail parks across the UK.

But whether this will be another Lifestore, Marks &amp; Spencer’s attempt to create a chain of upmarket lifestyle furnishing stores that collapsed in costly failure last year, or a rampant success in the mould of Ikea, which Ilva resembles, is a matter of some debate.

Lifestore’s failure was largely attributed to its high prices, and as a mass-market proposition Ilva will succeed or fail on offering good value.

The chain, which has three large stores in Denmark, was bought for Ã¢âÂ¬100m (£68m) in 2003 by British retailer Martin Toogood, former chief executive of Habitat and B&Q. With substantial backing from private equity firm Advent International and various banks, he plans to open the first of three UK stores in Lakeside, Thurrock – on a site earmarked for an M&S Lifestore – at the end of this year. Last week Toogood hired agency Isobel to create the launch campaign for Ilva (MW last week).

A store in Gateshead, also on a site that previously housed an M&S Lifestore, will open early next year and another opening is planned in Manchester the following Easter. Toogood is looking to build a chain of 20 stores (outstripping Ikea’s 13 in the UK) within the next decade, and he talks optimistically of a stock market flotation within three years.

Toogood claims that Ilva will revolutionise the way the British furnish their homes. However, he plays down the idea that Ilva is trying to copy Ikea or that it will compete directly with the retailer, saying that in Denmark the two are seen as “complementary”. He says that while the Swedish chain is essentially an accessories store with some furniture, Ilva offers the reverse, majoring on furniture with accessories as an add-on.

“We have done our homework. We expect to create some real choices in quality furniture at great prices in a fabulous shopping environment with great service, offering products you take away today,” he says. On offer will be

leather sofas at £500 and wooden coffee tables starting at £60 and going up to £850. With 90 sofa shapes, 80 dining tables and 70 different beds, Ilva aims to be a mass-market retailer offering high design standards at relatively low prices. Its stores are smaller than Ikea’s, which are at least double Ilva’s 120,000 sq ft size, but Toogood says the absence of Ikea’s “warehouse” collection area means Ilva stores will offer similar retail space.

No wonder some are already calling Ilva “an Ikea for grown-ups”. The Swedish chain tends to attract people aged in their 20s and early 30s with fairly low disposable incomes. Toogood says Ilva is aimed at a slightly better-heeled customer, aged between 25 and 50 years old with significant discretionary income, who are probably homeowners.

Toogood is evangelical about the joys of shopping at Ilva. “Our products have gone past the eyes of our Danish designers. They are clean and beautifully styled. It is different furniture from what you can get in the UK,” he says, in words vaguely reminiscent of Van Den Puup, the comic “elite designer” who fronts Ikea’s ad campaign (left). “The stores are clean and fresh, they are high, they are beautifully lit, they are not like anything you expect to see in the UK. We are using a furniture college to train our staff, the furniture is designed by Danish designers, it is in an environment lit by theatrical designers,” he enthuses.

It sounds like mouthwatering stuff, but Mark Horgan, retail director of UK furniture market leader MFI and a former United Biscuits marketing director, thinks Ilva could find life tough in the UK. “New concepts in furniture are difficult to establish. There are very few high profile new entrants; most come in at niche positions,” he says.

Horgan refuses to speculate on whether the arrival of Ilva will affect MFI. “I’ll deal with it when it happens,” he says. But he defends MFI’s recent performance following the dire time it had last year. Its overall share of the £11bn furniture market sank in 2004 to seven per cent from nearly eight per cent in 2003, while Ikea’s market share increased to five per cent from 4.6 per cent, according to Verdict. Horgan admits MFI has had a rough time. “Last year, we were a little bit off the ball on promotions, product development and systems implementation,” he says, but adds that the last trading statement showed sales had improved.

Horgan plays down similarities between MFI and Ikea. “It has 24 million customer transactions each year and the turnover is about £1bn, so it has an average transaction value of £50, while MFI’s is £600. Against our kitchen market share among customers, which is in the 20s, it has four per cent,” he says.

With furniture sales facing tough trading as the housing market stalls and retail sales go into decline, this will be a hard time for existing players and for those launching a new chain in the UK. But Verdict Research analyst Gavin Rothwell believes big new entrants will be applauded by rivals. “Ikea says it welcomes Ilva into the UK. It thinks a new entrant will create more interest in furniture, which will boost the whole market,” he says.

One source claims there is a latent backlash against Ikea, which was exacerbated by the riot at the opening of the Edmonton store in February and a feeling that customer service is lacking. The chain has a problem finding sites for new stores, which means its existing outlets trade at full capacity and this can make it an overcrowded, uncomfortable experience. Even so, Ikea topped a recent Verdict customer satisfaction poll. Ikea was unavailable for comment.

Ilva’s marketing strategy will echo that of Ikea, with a door-drop of catalogues to homes in the new stores’ catchment areas.

In truth, the UK furniture market is highly fragmented and ripe for new concepts. But while DIY stores have thrived in recent years, benefiting in part from popularity of home makeover television shows, furniture has languished. An exciting design-led concept may be just what is needed – provided it isn’t too expensive.