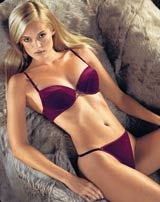 The heavily male-associated Jockey underwear brand is going to stretch its appeal, if not its waistband, next year when it plans to focus on female lingerie for the first time.

Jockey has appointed sales and marketing director Gavin Sinclair to oversee the push (MW last week). Sinclair is tasked with changing consumer perception of the company famed for inventing Y-fronts and will be responsible for driving awareness of Jockey’s women’s products. Jockey’s female range has proven a success in the US, he says, and the company plans to replicate this performance in the UK.

The market for women’s knickers in the UK was worth &£370m in the 12 months to September 2003 (Mintel), up from &£350m in 2001. Triumph remains the market leader thanks to its Sloggi brand, followed by Sara Lee’s Gossard and Pretty Polly brands.

There is a bewildering array of products now available to fashion-conscious women, from tangas, thongs and strings to hipsters, boxers, hot pants and French knickers. Innovation in fabrics, styles and patterns drives the branded underwear market.

The leading female underwear brands target the “middle” market of women between 18 and 35, who are more likely to buy branded underwear than rely on cheaper own-label alternatives.

Gossard brand manager Jill Perks says Jockey has chosen a time when the market is growing, but adds that brands cannot be complacent about own-label competition.

“There is huge competition from high street labels as well as celebrity backed ranges such as Kylie Minogue’s line. Women are more discerning in their tastes. It is no longer enough to replace the old with the new.”

Pretty Polly head of marketing Jayn Sterland agrees: “The brand position is under threat from the supermarket ranges, which are excellent. Brands are under pressure to offer something different.”

This highly competitive market will be a challenge for Jockey, which insiders say will struggle with its image as an older, masculine brand. Jockey’s previous attempts to reposition itself as a more youth-oriented brand in the UK have met with little success.

In 1999, Grey created a &£1m ad campaign that targeted a younger market. At the time, Jockey claimed it wanted to become the “Coca-Cola of underwear”. The next year, the company launched a press and cinema campaign positioning its garments as sensual, sophisticated fashion items. Four years on, the brand’s core customer base of men over 45 remains unchanged.

Sinclair will need to make the brand sexier – an important selling point in a market where the advertising often seems to be more concerned about raising male blood pressure than anything else.

Sinclair says the first challenge will be to make the brand more relevant to women. Jockey has conducted consumer research that has shown brand recognition is high. But, says Sinclair, the company needs to change the perception that Jockey’s appeal is only to older male consumers.

“We don’t want to abandon our core market, but we will make our brand more relevant to other consumers. We have to break new ground with new products and packaging, and become more focused in marketing the brand. Jockey can transcend the gender divide.”

Jockey will focus marketing on the comfort and quality of its products, a considerable departure from the headline-grabbing sexual imagery of brands such as Sloggi, which recently had an ad for a thong banned in normally sexually libertarian France because the regulators found it degrading to women.

“The Jockey brand is the promise of comfort, quality and fit. We aim to satisfy the human need for comfort, male or female. This is as relevant today as it has always been.”

Jockey’s emphasis on the quality of its underwear, rather than the sexiness of its models, could mark a wider shift in the way women’s underwear is advertised.

Gossard, in particular, is at a crossroads. Marketing director Shaeren McKenzie, who was widely applauded for ditching the male-focused “Hello Boys” Wonderbra campaign, left five months ago. Her successor, Stephen Holbrook, has to decide where to take the brand next.

Sterland says previous Gossard advertising was designed by men for men. She says attitudes are changing: “It is completely old hat to just put a semi-naked woman on a poster. Stephen Holbrook has a difficult job. It will be interesting to see where he will go next.”

Sylvie Spark, account director for Gossard at WARL Change Behaviour, says there is room for angles other than sex appeal. “There is no longer only one approach. The ‘Hello Boys’ ad set the mark in the Nineties that everyone else had to follow, but not any more.”

But, Spark says, sexiness and sensuality will always play an important part of underwear advertising. She adds that it is now important to be sexually appealing to women, rather than men.

Ultimately, advertising can only reflect the style of new products. Jockey’s tagline says that its products are “the next best thing to being naked”, but the company has much to prove before women trust its underwear so intimately.