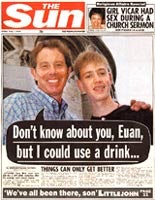 The clock is already ticking for Nick Canning, the new marketing director of The Sun and News of the World, and he hasn’t even started the job that has been described as “a kiss of death”.

The circulation of both News International papers is in decline.

The News of the World has fallen below the significant 4 million mark twice during the past six months, leading to the sudden replacement of editor Phil Hall by ambitious Rebekah Wade in May.

The Sun is also having a hard time, with its circulation dropping to below 3.5 million twice within the past six months.

Canning, a traditional packaged goods marketer, has spent the past five years at United Biscuits, and ended his stay there as marketing director of KP Snacks. He will be called upon to stop the rot as soon as he sets foot in the offices of NI’s News Group Media, which incorporates News Group Newspapers and their new media interests in News Group Digital.

One press buyer says: “NI doesn’t suffer fools gladly and is impatient for results. The job is a kiss of death – you’d want major danger money to do it.”

But previous chief Ellis Watson disagrees. Watson quit in April last year to run The Sun’s ISP, Currantbun.com, before leaving NI’s division of Rupert Murdoch’s News Corp to start his own new media business, Talkcast. He says: “NI has a good management culture – it doesn’t look for scalps and I was allowed to take risks.

“It’s a very, very big job, but he has a good team and NI pays a lot of respect to the role and function of marketing.”

The post has taken 16 months to fill, with one insider claiming the job was offered to two people before Canning was approached.

Canning is fully aware that part of his brief is to “make sure that circulation goes back up”.

Richard Beaven, executive UK planning director at Starcom Motive, which handles media buying for KP Snacks, says Canning is a “galvanising force” and “is very good at relationship building”. Those skills will be called upon when working alongside editors who play their part in building circulation by making sure that the product is right.

One agency insider says: “I don’t think The Sun has captured the imagination of the nation as it has in the past. It needs to get back to that.”

A press buyer adds: “The Sun is too middle of the road. It seems to swing whichever way for the popular vote.”

Under Wade, the News of the World is likely to opt for a watered down diet of celebrity gossip and news, cutting out the sordid suburban sex scandals long associated with the title.

One press buyer explains: “That market is principally driven by promotions. The problem with The Sun is that the middle market is so aggressive in the promotions area. The Daily Mail is a well-oiled machine and you could say The Sun’s machine has become a bit rusty.”

One newspaper industry insider believes that NI’s two tabloids have lost momentum and an ability to innovate when it comes to promotions.

Canning accepts that the newspaper market is particularly fast-moving and promotion-led. “But I think there is a realisation that things can be learned from packaged goods-type businesses. I think NI was looking for someone to come in and break the mould.

“It’s a massive job – that’s one of the things that attracted me to it. They are well-evolved, big brands that are not being marketed as well as they could be.”

He will not be drawn on future plans but refuses to rule out a branding campaign – despite industry doubts – and cites the “Sunday Times is the Sunday Papers” campaign as a mark of how successful these initiatives can be.

Apart from boosting circulation, Canning says his brief also involves “serving the long-term future of the brands” and making sure they are “relevant in today’s world”.

He will no doubt be looking at brand extensions and the long-term strategy of other multimedia platforms. Experimentation with new media has already resulted in Currantbun.com, renamed Bun.com, being sold to World Online and the establishment of more content specific sites, such as Page3.com and Footballfc.com.

Beaven says: “NI must think seriously about how it uses the brands and how it develops them. The media landscape is changing.”

The proliferation of channels – from the Internet and third-generation phones to palm-held devices – will threaten not only newspaper readership but also ad revenue.

Both Canning and Clark will have their work cut out to remain part of the team at NI in the highly competitive and rapidly changing media world.