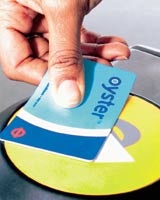 Ostensibly, Transport for London’s (TfL) Oyster smartcards were introduced to speed up passengers’ journeys – but the implications of the technology reach far beyond avoiding the Monday morning queue in a chilly Underground station.

The card is slowly changing the basic payment mechanism for public transport in London. The traditional weekly, monthly and annual Travelcard system is based on payment for unlimited travel over a fixed period of time – and Oyster cards can be bought this way. But Oyster is also available as a pre-pay card, which can be loaded with up to £90 worth of credit for travel on the networks.

Over 500,000 Oyster cards have been issued so far, and TfL aims to have 3 million in circulation by the end of 2004. It took five years of planning to launch Oyster, with the installation of 150 new gates at Tube stations and 16,000 card readers across the bus, Tube, tram, and Docklands Light Railway networks.

Each Oyster card contains a microchip, which stores data relating to the card’s owner, ticket values and validity. Since cards can be registered to an individual, that person is able to cancel the card if it is lost or stolen, much like a credit card.

Unsurprisingly, the card’s introduction has thrown up marketing and technical problems. There has been pricing confusion among passengers, and the inevitable malfunctioning technology. Civil liberties watchdogs have also raised concerns over potential invasions of privacy – the card’s technology monitors users’ movements through the network.

TfL took a “softly softly” approach to the introduction of Oyster. DirectorÂofÂgroupÂmarketingÂChris Townsend says: “In marketing Oyster, we realised that we were obliged to put over a very complicated message. We launched a phased campaign so as not to overload people.”

The card was initially launched to TfL’s 80,000 staff in November 2002. In early summer 2003, it was made available to annual and monthly season ticket holders, promoted with a direct marketing strategy. Nicole Carroll, marketing director of Transys, which developed Oyster, says: “We decided that we would take a very boring and phased approach to launching Oyster, making sure that people understood one part of the technology before introducing the next bit.”

When weekly cards were introduced in the autumn, Publicis, the agency handling Oyster’s marketing, launched advertising on the Tube network, as well as in the Evening Standard and Metro newspapers.

The pre-pay card, launched at the beginning of January, was supported with a huge network-wide poster campaign. Pre-pay Oyster cards can only be used on the Tube network at the moment, but as an incentive to take-up, pre-pay prices are frozen for this year at 2003 rates – the user will be charged last year’s fare when he or she makes a journey.

There has been confusion over the fare freeze, however. Many people believed that ticket prices were frozen for Oyster card users as a whole, rather than just for pre-pay cardholders. The explanation apparently lies with London Mayor Ken Livingstone’s office, which muddied the waters when it announced there would be an Oyster fare freeze, without differentiating between pre-pay and season tickets. TfL has always maintained the price freeze was just for pre-paid cards.

A spokesman for the London Transport Users’ Committee, which has written a letter of complaint to the Mayor’s Office, says: “Our concern relates to the confusion around the fact that pre-pay is a totally different product to the rest of Oyster, but this has not been marketed very clearly. Overall, we believe that Oyster is a step forward for users, but there have definitely been marketing problems.”

Additionally, what TfL doesn’t spell out is that current discounts still make it cheaper for most passengers to buy a card for a period of time than to buy a pre-pay card. Essentially, pre-pay is aimed not at the daily commuter but at travellers out and about at the weekend.

The pre-pay cards have also suffered negative publicity thanks to a system that calls for pre-pay passengers to both swipe in and swipe out – otherwise they are overcharged for their journey. TfL has had to put posters across the Tube network reminding users to do this.

In a wider context, Oyster has provoked fears about smartcard technology in general and its effect on privacy. Although TfL claims Oyster data is not saved, and that it is only used to work out trends, civil rights group Liberty believes this is still an invasion of privacy.

Liberty spokesman Barry Hugill says: “Smartcard technology, whether it is used as a loyalty, travel or credit card, is able to store data about individuals that can then be used by whoever operates the system.”

Experts believe the use of smartcards on transport is only the beginning. A few years ago, a trial was carried out in Swindon by Mondex to see whether smartcards could be used instead of currency; and in Glasgow, a free young persons’ card has been introduced, which can be used as a pool membership, library and discount card.

It is believed that smartcard technology will underpin national ID cards, which Home Secretary David Blunkett is trying to introduce. Early indications suggest that these cards could double as passports.

Retailers are also looking at smartcards. Bob Wilmott, a director of Diametric, the company behind WH Smith’s Clubcard, says: “As far as I know, the only UK loyalty scheme to use smartcards up to now is the Boots card. At the moment, they are a little too expensive compared with magnetic strip cards. But the technology is there, and for marketing purposes it will become indispensable. It will be able to track individual customers’ buying patterns, so companies will be able to streamline the market to suit the customer – getting rid of wastage.”

At the moment, several UK counties use smartcards for concessionary travel, although only London and Cheshire use them on a commercial basis. Proponents of the technology hope that travel smartcard schemes will eventually become fully integrated across the country, and TfL is in talks with several train operating companies about taking up Oyster.

TfL, meanwhile, is continuing to roll out Oyster: in March, it will launch pre-pay Oyster cards for buses; and a Freedom Oyster Pass, giving concessionary travel to OAPs and the disabled, will arrive in April. TfL is investigating ways to develop the card for other sectors and is in talks with several London boroughs about joint library/Oyster cards. Whichever way smartcard technology ends up developing, it looks as if chips will increasingly supersede change in consumers’ pockets.