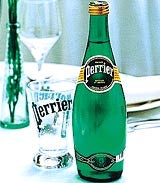 Perrier, once known as the Yuppies’ favourite soft drink, is trying to put the fizz back into its sales by launching plastic bottles to target the growing impulse-buying sector.

Now that Perrier – which was bought by NestlÃ© in 1992 – has had the bottle to expand in an already crowded market, the question is whether it can claw back the lead gained by its rivals.

Perrier, which says it took 11 years to develop the concept, predicts it will sell 16 million plastic bottles this year alone and 150 million in the “medium term”. The plastic bottle is being introduced across Europe and will be available in the UK from July. Glass bottles will still be available.

Industry experts are sceptical about whether Perrier can achieve its ambitious targets. One says: “I’m surprised it’s taken this long for Perrier because the market’s so competitive. It will have a job on its hands to catch up with some of the big brands already available.

“The debate was whether moving into plastic would diminish the brand’s premium status, but I think Perrier realised it was narrowing its market too much.”

Despite recent reports questioning the health benefits of drinking mineral instead of tap water, sales of bottled water continue to soar.

Zenith International, the drinks marketing consultancy, says bottled water is the fastest-growing sector of the UK soft drinks market, with a consumption of 1.3 billion litres last year and retail sales worth £550m. The market increased by 15 per cent, with Highland Spring outperforming that figure by two per cent.

The market for home consumption of mineral water was worth £179m for the year to February 4, according to Taylor Nelson Sofres (TNS). The market increased by ten per cent in value and 13 per cent in volume during the same period. Analysts at TNS say sales of still and flavoured water are still growing.

Innovation is driving the growing sectors, with Volvic Touch of Fruit and Danone Activ – both owned by Danone – performing well since their launch last year.

Worryingly for Perrier, sales of sparkling water are static. Globally, Perrier retains a 12 per cent leading share, with Danone on 10.5 per cent. But Perrier has finally come round to viewing its glass bottle-only policy as its weakness rather than the brand’s strength.

Rachel Bateson, sales and marketing manager of Strathmore, the number one on-trade and number four off-trade mineral water, says: “Bottled water is a huge category in impulse. More consumers are drinking it on the move. The launch of the sports-cap bottle has kept that moving and I’m not surprised Perrier’s trying to capitalise on this.”

The company has, so far, refused to elaborate on the £3.5m launch of what it calls “a Perrier for every occasion”. The campaign, by Ogilvy &amp; Mather – which has held the Perrier creative account since 1997 – is likely to focus on the bottle’s convenience and portability, Perrier’s reputation and its availability.

While sales lay dormant in the wake of the benzene scare, a wave of competitors flooded the market and the tide turned against the sparkling water giant.

Perrier claims it was the first to launch flavoured water, but this corner of the market has also been squeezed with new entrants such as Strathmore and Clearly Canadian.

Vending machines, which previously sold only cans or bottles of soft drinks, now serve mineral water – another area that Perrier has missed out on.

Richard Hall, chairman of Zenith International , says: “This move will undoubtedly aid Perrier’s sales and enable it to stretch its distribution substantially.

“But the brand no longer has the exclusive status it enjoyed in the past. Gone are the days when you would ask for a sparkling water, meaning a Perrier – nowadays you could be given any one of a number of different brands.”

Industry experts believe there is no chance that Perrier will do the unthinkable and launch its own non-sparkling brand. They believe Perrier launching non-fizzy water is about as unlikely as Evian launching a fizzy, because consumers would not understand the proposition.

A Perrier spokeswoman says it would not be possible to produce still water from its current source, which is naturally sparkling.

But after finally breaking its brand tradition by introducing plastic bottles, it may only be a matter of time before Perrier has to consider splashing out on launching still water.