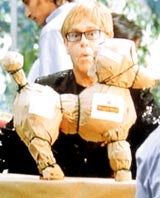 The Royal Mail may have signed up to its first Hollywood promotional deal – with Lord of The Rings’ sequel The Two Towers (MW last week) – but it does not appear to have any magic spells to help it ward off its current cash crisis and protect itself against impending competition.

Instead it is risking the wrath of consumers with news that it will be trialling a charge of £14 a week for households and businesses that receive, on average, less than 20 items of post a day, to ensure that the post arrives before 9am. Negative media coverage saw Consignia’s chairman Allan Leighton swiftly back-pedal over the weekend and the trial will now offer £5 and £10 levels of service as well.

However, the tough measures Leighton is hoping to take are already proving unpopular with small businesses and the public, and have yet to be approved by industry regulator Postcomm.

Leighton is ringing the changes following the group’s grim first full-year figures as a plc. Consignia, which comprises Royal Mail, Parcel Force Worldwide and Post Office Counters, made a massive £1.1bn pre-tax loss for the year ending March 31 2002. And Leighton intends to slash 17,000 jobs in delivery offices, in addition to the 13,000 redundancies already planned in the parcels’ division. He has also confirmed that the name Consignia is to be scrapped in favour of Royal Mail Group. The overhaul follows the news that second post is to be scrapped by 2003 on the grounds that it accounts for 20 per cent of Royal Mail costs, but just four per cent of deliveries.

It is against this backdrop that Royal Mail director of brand and communications Paul Troy must convince consumers and businesses to continue using, and increase their use of, Royal Mail services. Eighty per cent of deliveries are business-related and Troy has realigned his £40m marketing budget to reflect this.

“We get the bulk of our revenue from business customers. What I want to do is focus the brand more towards them.” Troy says that last year the company spent £12m on its “Send a letter” campaign, but has spent nothing on it this year. Instead he plans another multi-million September advertising campaign based around its Special Delivery service and business services.

Last Christmas, Elton John starred in a television ad to emphasise the importance of the Royal Mail in delivering goods bought on the Internet. The hiring of John for a rumoured £1m courted controversy as the campaign coincided with Consignia’s announcement of job cuts.

Troy is unperturbed by such criticism, saying that research shows the ad attracted awareness levels that were eight-times higher than any previous Royal Mail campaign. He claims that the deal with John cost less than is supposed as the ad acted as a showcase for the star’s single “I want love”.

There has also been an increased focus on sales promotions, mostly through Claydon Heeley Jones Mason, to increase stamp sales. Last year Troy launched the Million Pound Stamp promotion that gave people buying a book of first class stamps the chance to win £1m. He claims the promotion was a success and, as a result, stamp sales increased by 16 per cent.

However, Datamonitor analyst Samantha Largo says Leighton has not gone far enough. “Nothing Royal Mail has announced is drastic enough, what it has done so far are small initiatives.” She says Consignia needs a radical programme of integration across its business,and more alliances with European competitors.

There are many reasons why the group is floundering. Observers point to the installation of a computer system that will eventually cost £1bn, slower-than-expected growth in bulk advertising mail, the out-dated Parcel Force business and failed overseas expansion. Moves by the Government to transfer its Benefits Agency transactions away from the counters’ network and decades of under-investment are also factors.

A glimmer of hope for the group is that, despite the advent of-mail, usage of Royal Mail postal services does not appear to have declined. According to Royal Mail figures, the number of items sent each day is 82 million and mailings have grown at two per cent each year for the past ten years. A Royal Mail spokeswoman says that the increase comes from the posting of paperwork associated with people owning shares and using financial services, festivals, such as Diwali, and an “explosion” in sending postcards.

As well as the controversial charge for post delivered before 9 am, the group has also experimented with delivering parcels through alternative systems, including individual locker banks sited at a public address. There are also plans to let people specify the most convenient place to have items delivered in an effort to make “failed delivery a thing of the past”. There is the possibility of collection points at supermarkets, garages and high-street stores.

The trials are vital for survival as Royal Mail’s monopoly on postal services will be lost once the sector is opened up to competition. Postcomm is awarding delivery licences in phases, with full competition scheduled for April 2007. The regulator has already awarded 12-month interim licences to Hays DX, the Business Post subsidiary UK Mail, Express Dairies and European giants Deutsche Post and TPG. Services such as UK Mail will work by using the Royal Mail to carry the post for the final mile of its journey, but there are still discussions over how much Royal Mail should charge.

UK Mail managing director Guy Buswell says he is aiming for three per cent of the market within the first three years of operating. He adds that the group is still working on its products and services, but says initiatives such as selling stamps and a business class service will help it compete with Royal Mail. UK Mail’s marketing plans are still in the early stages, but Buswell says it won’t mirror those of Royal Mail.

“They overspend on marketing,” he says. “They have no competition yet. My view is that their marketing strategy is probably one of the things Leighton will review.”

Peter Carr, chairman of postal services consumer watchdog Postwatch, applauds the steps taken by Leighton, but urges Royal Mail to find out what the consumer wants instead of imposing initiatives. He is also critical of Royal Mail proposals for a new pricing system based on the size and thickness, as well as the weight, of a letter, saying this could add confusion and impact negatively on business post.

Royal Mail might still have a monopoly in postal services, but it must move to thwart competitors and show customers that its marketing matches reality. Until such time, it will be hard for customers to disassociate the brand from late deliveries and reduced services.