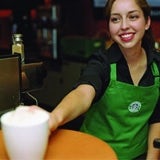 Starbucks has followed the likes of McDonalds, Nike and Apple and removed its brand name from its logo. But is setting the Starbucks siren free the right thing to do?

By disengaging the name from the logo, Starbucks obviously feels that its visual identity has the strength to stand alone.

Observers suggest that customers recognise and feel affinity to the Starbucks name rather than the mermaid character within it and some have questioned why it is part of the coffee chain’s logo at all.

Logo changes don’t often sit well with the consumer, as Gap found out to its detriment last November.

The US clothing brand found itself amid a PR disaster when it changed its logo on its website and met a backlash of consumer complaints.

Gap made a U-turn and reinstated its original logo just days after the change, but not before doing its reputation further damage through some poorly executed dabbling in social media and crowd sourcing.

Starbucks is attracting a similar backlash with fans on its Facebook page leaving negative feedback. Fans have warned that it is making the same mistake and should learn from Gap’s experiences.

CEO Howard Schultz hints that removing the Starbucks Coffee name from the logo allows it to diversify and expand its product range.

It has already had some success in diversification by introducing branded smoothies and food as well as its own branded instant coffee Via which is available in supermarkets. Starbucks has also tried its arm in the music industry releasing records by Paul McCartney and Bob Dylan.

The new Starbucks logo doesn’t come into effect until the spring, which means that by then, consumers may have gotten used to the new look, but brands with iconic visual identities must be careful of straying too far from what makes it iconic to consumers in the first place.