Weetabix, a staple of the British breakfast table, has just been swallowed up by Texan venture capitalist Hicks, Muse, Tate &amp; Furst. The acquisition gives Hicks Muse another product with a strong heritage to add to its growing portfolio of quirky – and very “British” – brands.

While it is clear that Hicks Muse has plenty of cash – it has spent &£642m on Weetabix, just weeks after shelling out &£105m to Unilever Bestfoods for dairy brand Ambrosia – it is less clear what the long-term strategy is for the brands in its portfolio. The bulk of the company’s UK brands come under the banner of Premier Foods. They include Crosse &amp; Blackwell, Smash instant potato and Hartley’s jam. Many of the brands were acquired from Hillsdown Holdings in 1999 and Hicks Muse also bought Nestlé’s ambient food brands last year, folding them in to Premier (MW May 9, 2002).

So far, the secretive company has only revealed that it plans to hold Weetabix and its sister brands Alpen, Weetos and Ready Brek separately from Premier Foods. Industry observers say this indicates that Hicks Muse has bigger plans for the cereal company.

A food industry analyst says: “Hicks Muse might be keeping Weetabix separate because of its value as an international brand. Premier does not have the infrastructure to run global brands and Weetabix is the only brand Hicks Muse has with that potential.”

He adds that Hicks Muse will already be looking at its potential exit routes – either by selling Weetabix to a trade buyer or floating it.

Although Weetabix may have suffered from a lack of innovation in recent times, the George family – which has owned the company for the past 70 years – has developed a strong brand with a great heritage. Weetabix took the “nation’s favourite breakfast cereal” crown from Kellogg’s Corn Flakes last year, and Euromonitor values sales of the Weetabix brand, including its Mini Crunch range, at &£87.7m. This compares with &£85.1m for Corn Flakes. Overall, Kellogg remains the market leader, with a 28.2 per cent share. Weetabix has 13.6 per cent while Cereal Partners, the joint venture between Nestlé and General Mills, has 12.7 per cent.

Industry pundits say that Sir Richard George, the Weetabix chairman who will remain with the company until next April, has managed the company well, despite a fall in pre-tax profits from &£48.3m in 2001 to &£44.4m last year. That dip is attributed by many to a lack of innovation and new product development.

Paul Houlding, who pitched for the Weetabix business at incumbent agency Banks Hoggins O’Shea/FCB and is now managing partner at breakaway agency Isobel, believes the Hicks Muse acquisition is a watershed. He says: “The world has moved on from when Richard George started at Weetabix and although the new owner is not starting on the back foot, the company needs to be more aggressive.” 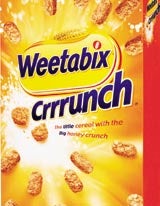 The cereal market is relatively static, with growth of about 0.3 per cent, to &£1.3bn, predicted this year. As a consequence, companies in the category have been fighting for market share, rather than trying to expand the market. In addition to this, the sector faces competition from new products such as cereal bars, as demand increases for products that can be eaten on the move.

Kellogg was the first cereal company to capitalise on this trend, launching its Nutri-Grain range of cereal bars in 1997. It now also produces cereal bars under the Coco Pops, Rice Krispies, Corn Flakes and Special K brands.

Weetabix has also moved into this area, with Alpen cereal bars and its Crrrunch and MiniBix Chocolate snacks, but it has followed, rather than led the market. “Kellogg sets the agenda in the UK market in terms of innovation,” says J Walter Thompson client service director Enda McCarthy, who is in charge of the Kellogg account. “It has its own clear direction.”

Not only are cereal companies seeing their core product eroded by modern eating habits, but they are also having to fight against new entrants to the breakfast market. United Biscuits-owned McVitie’s launched a:m, a range of breakfast muffins and cereal bites, earlier this year (MW March 27).

Another analyst expects Hicks Muse to invest significantly in all of its UK brands, in order to make them more attractive to buyers. It is the company’s stated policy to sell brands after three to five years. In the US, it announced earlier this year that it was boosting the advertising spend on the Swanson Frozen brand, part of Pinnacle Foods, by 20 per cent, in order to prepare it for a future sale.

An agency insider says that, once the acquisition of Weetabix has been completed, an agency review may be called: “I don’t feel that the current ‘Withabix’ campaign actually connects with consumers. The core benefit of the product is that it is energy-giving and I don’t think that relevance has been applied to the campaign. It is targeting a Middle England that probably does not exist any more.”

Premier Foods’ advertising is split between Delaney Lund Knox Warren and Clemmow Hornby Inge, and the insider suggests that it would make sense to move the business to one of these agencies.

Industry observers predict that Hicks Muse will concentrate on refining the positioning of the Weetabix brands in the UK and investing in new product development, before it tries to develop Weetabix internationally. Many are positive about the potential for Weetabix to expand overseas. The brand already has some penetration in Europe and North America.

Weetabix will have to develop as a global brand if it is to attract interest from the major players in the cereal market: potential buyers such as Nestlé – through Cereal Partners – and Unilever Bestfoods have stated policies of focusing on global products and are divesting the kind of brands that Hicks Muse has been snapping up. Analysts also believe Weetabix will need to have a global presence for a successful flotation.

In the meantime, observers will watch with interest to see whether the Texan venture capitalist can fortify the venerable breakfast brand and make it ready to face the wider world.