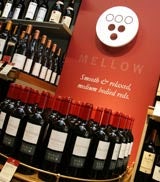 The news that wine retailer the Unwins Group is to launch an upmarket store format is attracting plenty of attention from a sector under siege from price-slashing supermarkets.

The specialist off-licences are in no position to toast their own health. After a series of takeovers and mergers in recent years, the sector has been consolidated into six main players: Bargain Booze, Oddbins, Majestic, Thresher, Unwins and Wine Cellar. And sales have remained relatively static compared to the grocer multiples, which accounted for almost two-thirds of the entire off-trade volumes last year (Mintel).

Overall alcohol sales in specialist off-licences are down by 13 per cent for January/February 2004 compared with the same period in 2003 (AC Nielsen). The situation for wine is even worse: down 15 per cent in a market that is up five per cent across the off-trade sector.

Meanwhile, Mintel reports that total British off-trade sales are up by three per cent to &£9.4bn for the year to February, meaning that the supermarkets are seeing growth.

However, Unwins remains confident about its initiative. It has created its Phillips Newman concept in an effort to lure customers who choose a certain wine because of taste rather than price (MW last week). Marketing director Ian McLernon says that the move to create a format aimed at the more upmarket consumer is a clear indication that the specialist sector is “far from dead”.

Phillips Newman will trade on the eponymous name of the wine and spirits business that acquired Unwins in 1921. The concept, touted as a “first” in the market, will arrange wines for sale by “style” instead of country in an attempt to ditch the “intellectual” labelling of wine by region. But, one supermarket wine buyer says that stores such as Asda have already tried the concept in the past only to scrap it shortly afterwards.

The first Phillips Newman opened last week on London’s Old Brompton Road and a second store is due to open in July. Unwins plans to convert a further 59 of its 388 sites to the Phillips Newman format in the coming year.

But the move comes in the middle of a six-month business review of the Unwins Group, which is owned by the Wetz family. According to industry rumours, this could lead to a sale of part or all of the business, and rival off-licence chain Thresher Group and retailer Co-Operative Group are both thought to be likely bidders in any such sale.

Recently, Unwins’ board was reported to have admitted to credit insurance and cash-flow problems. The company admits that financial difficulties had been forecast, but says it does not see the Wetz family being forced to abandon Unwins’ independence. Group sales in the year to February 28 were reported to be &£178m, with losses of &£779,000.

But Unwins is not the only specialist off-licence having to fight its corner: main rival Thresher Group is refining its offer. It has already scrapped five of its store formats including Bottoms Up, Victoria Wine and Wine Rack, and has replaced them with stores branded Threshers and The Local.

The Local, now being tested in Glasgow, will focus on beer and offer only a limited range of wines. The stores will also sell products such as chilled and “occasion” foods, newspapers and cigarettes, together with film rentals and lottery tickets. The group is also rolling out Threshers Plus stores, which will include gourmet food under the Leapingsalmon brand it acquired in July last year.

Neither Majestic nor Oddbins are expected to follow suit by introducing food and related items onto their shelves, while low-price chain Bargain Booze is unlikely to unveil temperature-controlled fine wine areas – but survival does depend on a niche. A Majestic spokesman says: “Specialist off-licences have to face the fact that UK retail is dominated by supermarkets and the trick is to find a niche.”

Majestic is in the unique position of selling cases of wines, not individual bottles, and operates in out-of-town outlets. Mintel says the warehouse is the only real star among the specialists. It’s the country’s largest wine warehouse chain, with 113 stores and reported a growth of 42 per cent in its pre-tax profits to &£3.96m in the 26 weeks to September 29, 2003. Total sales were up 21.8 per cent to &£69.1m.

McLernon accepts that off-trade sales growth is driven largely by supermarkets and Majestic, but he is keen to add that Unwins is ready to challenge the market and re-ignite interest in specialist retailers. He says: “The off-licence needs to reinvent itself. The problem with most off-licences is that they are dark, dingy and antiquated, and easily put off female and 18- to 24-year-old customers. The Phillips Newman launch will help to address these issues.”

Unwins’ new format is an obvious move to spruce up the business, but the industry will be watching closely to see if the 161-year-old business sells out entirely – such a move could be seen as the beginning of the end for specialist off-licences.