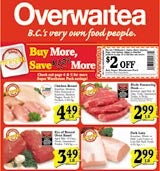 Canada: home to Niagara Falls, the Rockies and, apparently, the occasional handsome Mounty. It’s a land full of natural beauty, so the Diary’s idealised vision was somewhat dented by the news that Canadians are fast catching up with their North American neighbours in the fat stakes. A report late last year stated that obesity rates among Canadian children have skyrocketed over the past two decades. And CNN paints an even bleaker picture: “In the past 20 years rates of obesity have more than doubled among Canadian adults, and nearly tripled among children.” But why, you may ask, in a land where outdoor pursuits are portrayed as part of everyday life? Well the Diary may have found the answer in Overwaitea – weight for it… Canada’s third-largest grocery retailer. Overwaitea, with the tagline ‘BCs very own food people’ (are they made of food?), offers great deals in meat, meat and more meat judging by this ad. Perhaps Overwaitea is encouraging the Atkins Diet with recipes such as Hearty Hamburger Soup, or maybe it just has a glut of meat produce. Whatever the answer, the Dairy can’t help thinking that the retailer’s brand name is an apt one, given Canada’s rising obesity problem. It seems the country’s authorities should bow to pressure and embark on a nationwide roll-out of British Columbia’s Dial-a-Dietician service – yes it does exist.

AMS Media has planned a £3m campaign for Red Bull to highlight its latest Art Of Can event. The campaign will use press, radio and outdoor ads created by Kastner &amp; Partners.

Interest in all things South American has combined with issues of supply-chain management to bring about a spate of alcoholic drinks launches from the continent. Branwell Johnson explains