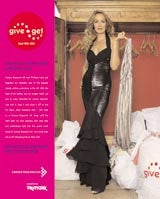 More than 2 million households are being sent GiveGet bags, with people encouraged to take their unwanted clothes to TK Maxx’s 150 stores or Cancer Research UK stores in September.

The initiative is supported by an ad campaign created by Soho Media Group, featuring celebrities such as Jerry Hall, Elijah Wood and Kate Winslet photographed by fashion photographer Jason Bell.

A GiveGet coffee table book of photographs, again taken by Bell, of 30 celebrities donating their clothes will also be sold in TK Maxx stores and a single entitled You Give, You Get will be released by Discal in September to support the campaign. A VIP trip to New York is also being offered as a prize.

Print advertising will break this weekend in the national press, including The Sunday Times, Metro and OK!, together with a broadcast ad appearing on a screen in London’s Leicester Square and a viral e-mail campaign. Advertising is funded by TK Maxx and media is bought by its agency Starcom Motive.