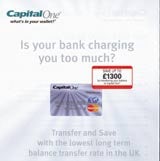 Credit card giant Capital One has called a review of its &£16m UK advertising business in what will be another blow to incumbent McCann Erickson.

The credit card company has already ditched McCann Erickson for Omnicom Group’s DDB in the US. The company has drawn up a shortlist of three UK agencies, including McCann Erickson, to pitch for its business. A decision is expected before the end of March.

A spokesman for the company denies that the UK will align its advertising business into DDB following the decision in the US, where the account is worth about &£200m. Media buying and planning duties with Starcom MediaVest are not expected to be affected by the review.

McCann Erickson has held the Capital One account since April 2003 following a review of its business in the wake of the closure of incumbent agency D’Arcy (MW April 17, 2003).

The spokesman says that the review does not reflect dissatisfaction with the existing D’Arcy-created “What’s in Your Wallet?” advertising campaign, which has been running since 2001. DDB has already been tasked with building on the theme in the US.

Capital One provides credit cards and loan services, and is one of the largest global distributors of Visa and MasterCard credit cards.