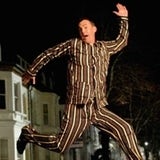 UK online bank Smile is to sponsor a series of podcasts from Capital Radio – the first deal of this kind for both companies.

The agreement underlines how podcasting is slowly becoming a mainstream broadcasting channel, but also how Capital Radio is continuing to shun traditional advertising in favour of sponsorship.

Podcasting is providing an area of light relief for many radio stations suffering from disappearing listeners. Earlier this month Ralph Bernard, chief executive of Gcap, which owns Capital, described the radio station as “in intensive care” in the wake of its listeners figure falling from 3 million to 1.8 million in recent years.

While podcasting won’t come close to making up the deficit in listeners, it is at least an area of growth that radio companies can look to exploit. About 25,000 downloads are made each week of Capital Radio’s three podcasts that Smile is sponsoring – the Breakfast, Flirty and Richard Bacon shows.

The two-month deal starts on Friday, with Smile getting ten-second bumper ads at the start and end of each podcast. It is part of a wider deal, planned and bought by digital media agency i-level, which will also give Smile online advertorial content, a series of five promotional home page takeovers, and a competition e-mailed to Capital Radio’s VIP club members.

It follows a similar deal earlier this month in which Disney linked up with Heart FM to push the forthcoming release of its film Chicken Little on DVD. The Rik Mayall-voiced recording of the story was aimed at families, and is to be followed by several other Disney tales, including Toy Story, Cinderella and Robin Hood.

Chris McKee, of Audible.co.uk, a company that specialises in developing commercial opportunities around podcasts, isn’t expecting too much advertising on this medium in the near future. He says that where brands are willing to get involved, it is usually as a sponsor rather than just as a buyer of ad spots. A recent example is Royal Bank of Scotland’s sponsorship of a golf podcast produced by sports programming specialist TWI.

“There isn’t a lot of advertising at the moment,” he says. “It’s starting to show merit, but there are difficulties in selling advertising because of problems in determining the number of listeners”.

Courtney Chadwick, a planner buyer at I-level, agrees, saying “sponsorship is where the opportunity is right now”. She adds that podcasts appeal to brands such as Smile.co.uk, which want to be seen as innovative.

The Ricky Gervais podcast, supported online by The Guardian, brought in several hundred thousand downloads a week at the start of the year. As well as attracting large audiences, it brought the commercial potential of the medium to the attention of marketers. Before then it had been the BBC that had been making the running, with free podcasts of shows from across its radio network.

Observers say that for more traditional advertising spots to gain traction in this market, the companies producing the podcasts will have to come to terms with the difficulty in measuring audiences, as well as rights issues over the inclusion of music tracks from radio shows.