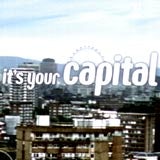 Capital FM is to stage quarterly music events in an attempt to reclaim its position as the essential sound of young London, as part of a major rebranding exercise.

Capital Radio is also to rebrand its Capital Gold stations and will phase out the “sunny day” logo across its regional stations, as well as in London.

Capital FM’s new cross-media strategy is attempting to reposition the station as “the number one music and entertainment channel for all young adults [aged 15-34] in London”.

As part of this strategy, the station will launch new music events, starting with Capital Christmas Live on December 11. The station already holds the annual Party in the Park event and the London Awards, which will have its title changed to the Capital Awards.

Capital FM’s new logo, created by Design Motive, ditches the four-year-old smiling sun logo (MW October 12) and gives the word ‘capital’ prominence alongside an icon resembling a smile, which may be used on its own.

The red, white and blue logo can change colour for use at events and on promotional material, and will be used across other media including the Internet, digital radio and TV.

The TV campaign, featuring Capital FM DJs Chris Tarrant and Margherita Taylor, breaks on November 12. It features the Sonique track “I Put a Spell on You”.