Official figures released by the Department of Business reveals that since the scheme’s launch in May, 154,927 cars have been bought.

The initiative, which sees consumers receive £2,000 when they scrap their old cars registered before 31 August 1999 to buy a new one, is part of the government’s strategy to help buoy the struggling car industry.

The government has said that it would underwrite 300,000 deals.

The highest take up has been in the South East of England.

Business Secretary Lord Mandelson says: “The scheme has contributed to the 13.5% jump in car manufacturing and the first growth in new car registrations since April 2008.”

Leading car makers such as Ford and BMW were quick to launch ad campaigns in April in anticipation of the scheme’s launch.

In July, new car registrations rose 2.4% in the UK, to 157,149, compared with the same month last year, according to the Society of Motor Manufacturers and Traders.

It marked the first annual increase in 15 months.

Lexus is launching a direct and digital marketing campaign to promote an upgrade offer to consumers, giving them free customisation of paint colours and alloy wheels or factory fitted satellite navigation systems. 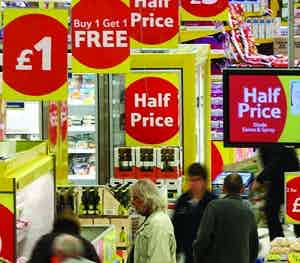 Government criticism of supermarket BOGOF (buy one get one free) deals has been labelled as misguided by Clive Mishon, chairman of the Institute of Sales Promotion (ISP).