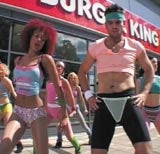 Burger King is consolidating its &£30m pan-European media planning and buying business and has invited four undisclosed agencies to pitch for the business against incumbent Carat.

The pitches are understood to be taking place next week.

Burger King senior manager for marketing impact Simon Foster says the fast-food chain has decided to consolidate its business across Europe in an attempt to “achieve greater consistency and cost efficiencies”.

Carat has held the account since May 2000, after then-owner Diageo moved it into the agency without a pitch. It followed incumbent Lowe Lintas &amp; Partners’

There have been a number of changes at the UK arm of the chain this year. In March, Burger King International chief marketing officer Andrew Brent left the company without a job to go to. He has not been replaced.

This was followed just weeks later by the departure of marketing director Paul Reynish, who also left without a job to go to. He was replaced by Dawn Foster, who was previously director of product marketing in the US.