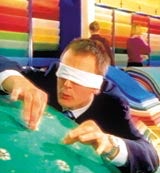 Courts, the furniture retailer, is dropping Carat from its &£15m media planning and buying account after an eight-year relationship.

MediaCom Accent, a division of MediaCom, has picked up the business without a pitch. The agency will start work in September.

Courts marketing controller Andrew Hickling says: “Courts will be launching concept stores, a new logo and brand image, as well as addressing new market segments over the coming year. It therefore wants a new media agency to take a fresh look at its media strategy.”

He added that the advertising account, held by RPM3, was not under review.

It is understood that Courts issued notice to terminate its contract with Carat last week after a difference of opinion arose between the two companies. Carat’s managing director Colin Mills says: “While it is always disappointing to lose business, especially after eight years’ hard labour, our relationship with Courts was never a great partnership.”

MediaCom’s other clients include Courts’ rivals DFS, Ikea and Harveys Furnishings Group. However, Hickling says he does not see this as a problem.

A spokesman for DFS, which uses MediaCom for national print buying, denies that there would be a conflict of interests.

Ikea and Harveys Furnishings Group were unavailable for comment as Marketing Week went to press.

The marketing chief who oversaw the British Tourist Authority’s (BTA) highly criticised UK:OK overseas campaign is transferring to the organisation’s Japan office. Director of marketing services Keith Beecham is leaving at the end of August. No decision about a replacement is likely to be made until new BTA chief executive Tom Wright takes up his […]

Warner Music UK has appointed Jane Davies to the newly created role of head of film, television and advertising, with a brief to establish relationships with major brands and advertising agencies. Davies was previously creative manager at Warner/Chappell Music and has held a similar role at Universal Music. Warner Music intends to promote licensing opportunities […]

Sainsbury’s has teamed up with Persil to run in-store dry-cleaning services. By entering this deal, it cuts new product development costs and risk, while the brand gains high-profile positioning. The downside is that the retailer’s margin is r