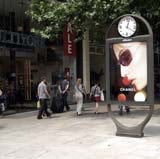 Luxottica, the Italian eyewear manufacturer that owns Ray-Ban, is believed to be in final negotiations with Carat International over handing the media agency its &£40m pan-European account.

The company, which also produces sunglasses under licence for companies including Prada and Chanel, called the pitch for the consolidated business in October last year. It is thought that other networks involved include Starcom, MindShare and OMD.

Luxottica currently splits the account across its European markets: MindShare handles Ray-Ban in the UK, and Mediaedge:cia holds the UK Chanel account. The UK marketing budget accounts for just &£1m of the total European spend.

Luxottica, which is based in Milan and is the world’s largest eyewear company, also owns Revo and Vogue sunglasses and the retail chains Sunglasses Hut and Watch Station. It licenses designer eyewear under the Prada, Gianni Versace and Moschino brands.

In 2004, the company signed a licensing agreement with LVMH’s Donna Karan International for DKNY-branded eyewear.

Last May, Luxottica unveiled a television, print and poster campaign for Ray-Ban created by McCann Erickson Italia. A UK Luxottica spokesman says the group was in final negotiations with a media agency but adds the pitch is being run from Milan. No one from Luxottica in Milan or Carat International was available for comment at the time of going to press.