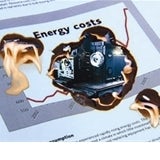 The trust receives about &£100m a year in funding, and marketing director Peter Hambly says it spends about 10% of this figure on advertising as part of its efforts to “accelerate the transition to a low-carbon economy by helping organisations reduce their carbon emissions and developing commercial low-carbon technologies”.

Hambly says it is money well spent, and encouraging businesses to cut their energy consumption is pivotal if the UK is to meet the long-term target of reducing carbon emissions by 60% by 2050. While there is much discussion of how consumers can do their bit, commercial and industrial consumption accounts for 67% of the energy used in the UK.

Hambly says marketing is both necessary and effective. Yet not all agree. In a report last year, the Green Alliance, a UK charity that promotes sustainable development, said that while it supported the body’s work “there were concerns that many businesses are not aware of its schemes and do not make use of the opportunities offered”.

Hambly says the message is getting across. “We work with thousands of businesses from large energy users to smaller firms. We handle 20,000 enquiries a year, made 5,500 visits to companies last year and have had 300,000 unique visitors to our website in 12 months.”

Interbrand chairman Rita Clifton agrees. She says the trust has been “very successful”, and that the trust is “definitely an organisation whose time has come”. She adds: “The issue of global warning has reached critical mass – even George Bush has admitted it exists. The trust helps companies understand the issue and what they can do about it.”

He states the trust has done much to build its brand since it was established in 2001, but adds: “The only reason we build brand awareness is to encourage businesses to take action. This is achieved by raising awareness of the issues surrounding energy efficiency and helping businesses to understand we are here to help them.

“Energy efficiency makes good business sense as it reduces costs and should be part of long-term strategy.”

He says the trust has been instrumental in reducing the energy consumption of companies it has worked with and maintains that its work has encouraged businesses to look at energy efficiency seriously. “Energy concerns are rising on consumers’ agendas and the likes of Tesco and Marks &amp; Spencer recognise that. All businesses realise the need to address their environmental impact.”

With the need to reduce carbon emissions paramount, the trust last week announced its intention to raise &£75m on the Alternative Investment Market to provide a fund to invest in renewable technologies.

Hambly says: “We must invest in innovation, in renewable technologies and encourage industry to act.”

The &£50m spend on marketing is significant, yet Hambly is adamant it is necessary: “If we have to increase our marketing activity, so be it. The situation is urgent and the effect of climate change is very real.”

Clifton agrees: “It is a lot of money, but we have reached a tipping point.”