Some years ago, mail-order clothing company Damart wanted to draw attention to the lightness and warmth of its Thermolactyl fabric. It hit on the idea of sending out a sample right-hand Thermolactyl glove, with an invitation to receive the left-hand glove free (subject to placing an initial order). The cost was more than three times that of a normal prospect mailing but the response rate was huge – some 40 per cent.

Damart was totally unprepared for this, explains Martin Smith, who ran the campaign at Damart and is now managing director of direct marketing agency Millennium. “The production line was thrown into pandemonium,” he says. “There was a shortfall of about 20,000 left-hand gloves.”

Some might consider this rather poor planning on Damart’s behalf. (Rule number one of a sampling campaign: always ensure there is enough product in store so that customers who wish to purchase after sampling the product may do so). However, Damart formulated a contingency plan.

“We couldn’t satisfy the orders so we sent out a voucher for the value of a pair of gloves that customers could use to buy anything they wanted,” explains Smith. “So they were obliged to go through the catalogue in detail.” This turned out to be a success and the average order value came in at about four times the cost of a pair of gloves.

But things might have turned out much worse. Without the voucher, Damart could have been left with a lot of dissatisfied customers and a damaged reputation for fulfilling orders.

This example serves to show that it is all very well being creative with a sampling campaign, and it may even pay off to give away a relatively high-cost item, but it is important to plan a campaign properly rather than rush headlong into it. Samples are expensive, so it is essential to contrive a campaign that maximises impact and sales while keeping waste to a minimum.

“Planning is the key to limiting waste,” says Darina Mulligan, account director at brand experience agency RPM. “You need to know who the consumer is, where they shop, what brands they believe in and how they like to spend their free time.”

Mulligan uses data from TGI to identify the most appropriate locations and times to reach target consumers in high-need states. For instance, when working for McCoy’s crisps, RPM wanted to promote the brand to men, so it sent teams to Twickenham, Cardiff and Murrayfield on the days of rugby matches. Fans arriving after a few beers in the pub were in the ideal frame of mind to be offered a free packet of crisps. RPM’s eye-catching one-man “porta-pubs” were able to distribute up to 35,000 samples in just two hours.

For products aimed at women, such as Martini, RPM conducts sampling campaigns at venues with a strong female bias, such as wedding shows and home-focused events.

Generally, sampling is not an exact science. Brands can target men through airports and rugby grounds and women through shopping centres and female-biased shows, but in essence sampling is a mass-market medium.

Sometimes clients do not appreciate this, and have expectations that are too high or just wrong. Gill Dunsford, managing director of field marketing agency Impetus, says: “One brand manager came to us requesting a campaign to target 23- to 28-year-old urban women and suggested that you could reach them by going into supermarkets. But you get more middle-aged people if you do that.”

And the lack of specificity has its advantages. Dunsford asks: “If you give a sample to someone outside the target market and they then buy the product, is that wastage?”

After conducting the sampling campaign mentioned above, Impetus discovered that the brand – a sweet liqueur – was targeting the wrong age group in the first place, she adds.

“It’s very difficult to tell someone they can’t have a sample,” says Paul Seligman, managing director of sales promotion agency Communicator. He emphasises that sampling works best for products that have a wide-ranging appeal.

Communicator recently ran a sampling exercise for Colgate Total Advanced Fresh toothpaste. The “Take this tube” above-the-line campaign, which emphasises the need for fresh breath in close proximity to other people, was backed up by sampling exercises in London Underground stations, alongside heavy advertising on cross-track posters and escalator panels.

“The key focus was on 20- to 45-year-old professionals, but the product has broad appeal,” says Seligman. “We chose the venues and the time of the activity to really focus on the product’s core promise of 12-hour fresh breath. You also have to be consistent with your message, so we checked the teeth of all our sampling staff.” 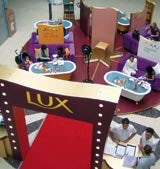 Brands and agencies need to establish the core objectives of the sampling campaign at the outset, says Mulligan: is it a launch, a product reappraisal or an educational exercise? “We once ran a campaign for Mini Cheddars,” she explains. “Brand awareness was very high but everyone had forgotten what they tasted like, so it was a volume-led campaign aimed at persuading people to reappraise the brand.”

Another reappraisal exercise was recently conducted by promotional marketing agency Dynamo for toiletries brand Lux. Again, the name was well-known but the aim was to relaunch the range to a younger, more dynamic market, explains Dynamo group account director Richard Barrett. Dynamo offered free beauty consultations in shopping centres. Customers were given a makeover, after which they had their picture taken and superimposed on a mock-up glossy magazine cover. There was also a third-party sampling exercise, in which customers at Knickerbox and Tanning Shop stores were offered a miniature bottle of liquid soap with every purchase.

This campaign had a relatively high price per unit, but the numbers of customers saying that they intended to buy the product made it worthwhile.

A campaign with a different aim – to entice people to try the product for the first time – was created by Impetus for adult sparkling soft drink Amé. The drink is relatively expensive, so buying it just to see whether they like it is an expensive risk for shoppers, explains Dunsford. Samples were given out at Summer Swing events in Kew Gardens, to eliminate the risk element and encourage people to buy a bottle next time they were shopping.

Having persuaded people to sample a product, how do brands then persuade them to go and buy it? Mulligan says it is important to include a sales-driving element in sampling campaign wherever possible. This may be something as simple as a coupon offering money off the first purchase, and redemption figures for these coupons can be useful for post-campaign evaluation. But this technique comes with a warning: “You want to drive conversion, but not just among people who will buy the product once because you are more or less giving it away,” she says.

Creative techniques can be used to drive customers to the point of purchase after their sample. For instance, in a campaign for Wall’s ice cream, RPM used “freeze and reveal” coupons, which customers had to place on a cold product in the freezer aisle to check whether they had won a prize. With wine brand Banrock Station, RPM gave consumers a hidden-message leaflet directing them to the wine aisle within the store. Once there, they had to hold their leaflet behind special screens to reveal whether or not they had won a prize.

Barrett agrees that money-off coupons can drive conversion to buy, but he also warns against using the technique too freely.

“If you have offered a good brand experience, you don’t need to double-discount. It seems illogical to do it,” he says. “The closer you are to the point of purchase, such as just outside the supermarket, the less requirement there is for a coupon. You have made a high investment already with the cost of the sample. You have to establish the minimum requirement to make consumers do what you want them to do.”

Last year, Dynamo ran a campaign in supermarket car parks for Jacob’s Thai Bites, delivering 1 million samples in four weeks. Sales rose by eight per cent during the promotion and by up to 400 per cent in some participating stores. All this was achieved without coupons.

Barrett suggests that it helps enormously if the sampling exercise is carried out against a background of above-the-line activity, as recall is greatly improved and extended. And if the brand experience is good, that should be sufficient to drive purchase.

In short, says Mulligan, the ideal sampling exercise is about finding a balance between cost, volume and experience. “Ideally, you’d have a huge experience and volume at no cost, but that can’t be done,” she jokes, “so it’s about finding the optimal point for each campaign.”