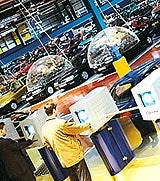 “There was no obvious internal candidate for my new job,” says Welham, “There was a marketing manager, but the company wanted to invest in marketing and strategy.”

Lex Auto Sales has eight supermarket sites, and is an organisation that is a similar size to CarLand.

CarLand, which was acquired last year by Concept and has six supermarket sites, recently appointed Yellow M to handle its &£5m advertising business in an attempt to shake off its “Arthur Daley” image.

CarLand is planning to run outdoor, radio, press and direct response advertising and is expected to open more UK stores. It also has plans to sell new cars at a lower price than tied dealerships if the European Union block exemption, which allows car manufacturers and their dealers to operate a closed market, is finally lifted.