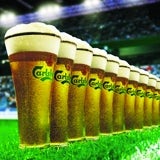 The brewer will switch focus to activating its sponsorship portfolio after signing several long-term agreements across its UK portfolio.

Recent deals include Carlsberg’s partnership with the Football Association to back the England national side and Wembley Stadium; and the recent four-year deal with Live Nation to make the Tuborg lager brand the official beer for music festivals, including Hard Rock Calling and Download.

Brand teams will now take responsibility for activating sponsorships. New team members have been appointed to increase the breadth of sponsorship knowledge.

Carlsberg launched the £30m TeamTalk campaign this summer to exploit its England partnership during the World Cup.

A spokesman says: “Carlsberg UK’s outstanding portfolio of sponsorship assets are market-leading. We look forward to implementing some outstanding activation in the coming years.”
The role of external communication and sponsorship director, held by Gareth Roberts, is now redundant. Roberts, who has looked after Carlsberg’s sponsorship portfolio for 13 years, is expected to leave at the end of the year. It is not thought he has a job to go to.

A new role, head of corporate affairs, has been created that covers external communications and public affairs. It is believed the role reflects Carlsberg UK’s intention to be more active in corporate social responsibility initiatives, including responsible drinking communication.