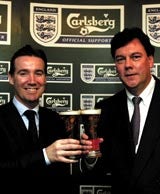 Carlsberg beer is to be the official sponsor of FA football in the UK for the next four years, in a deal worth about &£40m.

As one of the five “pillar sponsors” under the FA’s Partner Scheme (MW March 14), Carlsberg will sponsor the FA Cup and the England team up to, and including, the 2006 World Cup in Germany.

Carlsberg was one of the ten official sponsors under the FA’s previous sponsorship system, the FA Associate Scheme. FA chief executive Adam Crozier says the FA was “delighted to be building on its existing relationship with Carlsberg. It’s hugely respected within football.”

The deal means that the FA has locked in four of the five “top tier” partners it was searching for to guarantee a sponsorship income of &£200m over the next four years. Sports clothing manufacturer Umbro signed an eight-year deal worth &£130m to be the FA’s “elite” sponsor; Nationwide is paying an estimated &£30m to continue its sponsorship of women’s football for four years; and McDonald’s is paying an estimated &£28m to be the “grass-roots” sponsor.

The survey on Britishness (MW last week) contained the intriguing finding that only 35 per cent of 20to 30-year-olds describe themselves as British. Even assuming that, in this survey, not one inhabitant of Wales or Scotland (13.5 per cent of the British population) nor one single member of an ethnic minority (6.5 per cent) described […]

The CRE is increasingly belligerent about the dearth of non-whites in managerial positions. George Pitcher applauds its aims but has doubts about the approach