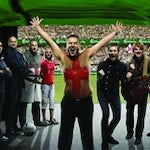 The brewer says market share in the six months to 30 June grew by 1.8 percentage points with gains in both the on and off-trade.

UK volumes increased by a “low double-digit percentage,” it adds.

The company’s UK business launched a World Cup-themed campaign in June to leverage the Carlsberg brand’s official partnership with the English national side.

The rousing “Team Talk” television advertisement featured English sporting stars urging the team to do well in the tournament.

The Carlsberg Group, which also owns the Tuborg and Kronenbourg brands, says it will increase investment in “brands and channel marketing to grow volume and value market shares” in the second half of the year.

The company says operating profit increased by 12% to 5bn Kroner (£500m) in the first-half of the year.