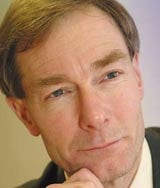 The position has been created as part of a plan to rationalise Carnival’s two UK brands, Cunard Line and P&O Cruises.

The appointment gives Dingle overall sales and marketing responsibility for the Cunard Line, alongside the responsibilities he already holds as managing director of P&O Cruises UK. In the latter role, he oversees the P&O Cruises, Swan Hellenic, Princess Cruises and Ocean Village brands.

Cunard Line senior vice-president for Europe, the Middle East and Africa Peter Shanks will now report to Dingle, rather than Pamela Conover, the Miami-based president of Cunard Line.

Carnival finally sealed its &£3.4bn bid for P&O Cruises in April after a hotly contested battle with Royal Caribbean Cruises.

P&O Cruises is still looking for a head of marketing, after the departure of Michael Bedingfield to join tourist body VisitBritain as England marketing director. The brand launched a television campaign last month, devised by Miles Calcraft Briginshaw Duffy, focusing on the experiences available to cruise passengers. The ads carry the strapline “P&O Cruises. There’s a world out there.”