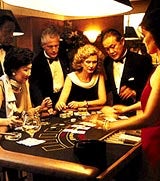 Casino operator London Clubs International has appointed start-up marketing agency Inferno to handle its advertising in advance of a radical shake-up of rules for gaming ads, expected next year.

LCI, one of the top five UK casino operators with a turnover of &£145m, hired the agency without a pitch following an introduction through the AAR. LCI has six casinos in London and will have three outside the capital next year.

Casinos were given greater advertising freedom in 1998, when they were allowed for the first time to produce A5-sized ads in newspapers, containing only factual information.

But under the Home Office gaming review being conducted by economist Sir Alan Budd, casinos expect to win greater freedom to advertise through press and poster ads. The results of the review are due to be published next July. LCI’s spend could reach &£2m a year following deregulation.

LCI head of UK marketing Maria Slater says Inferno has been employed to change the perception of casinos from places frequented by “James Bond and the underworld”. The aim, she says, is to “open them up to a much wider clientele and offer them as entertainment”.

Inferno was founded by former executives from the sales promotion agency Interfocus and handles work for Budweiser and Flextech.