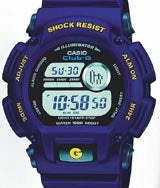 Watch brand Casio G-Shock is launching its first watch aimed at eight to 14-year-olds, after retailer Argos requested a product that was suitable for smaller wrists and more affordable.

The Club-G watch will launch this month and has similar functions to the existing G-Shock range, such as a stopwatch and five daily alarms. It can still withstand being dropped from a height of ten metres and has been designed to fit smaller wrists. The watch, which costs &£40, comes in nine colours and designs. The current range includes G-Shock and Baby-G, which cost from &£40 upwards.

The watch manufacturer has teamed up with TOTP (Top of the Pops) Magazine to support the launch. The magazine will run a Club-G “urban” column with gossip about pop artists such as the Suga-babes and Blazin’ Squad. The Club-G website will have syndicated TOTP Magazine content. In addition, Casio is planning activity with MTV later in the year for its G-Shock range, although this has yet to be confirmed.

Club-G will be available at all major watch retailers and the Casio@Carnaby store in London, Casio’s first branded outlet outside Tokyo. Casio is planning to use the store to test products and merchandising concepts before rolling them out nationally.