Sue Chidler provides proof that a lot can change at a brand in one year. Since she became Cath Kidston’s first marketing director in August 2013, the fashion and homeware company has opened flagship stores in London and Shanghai, secured additional private equity funding and last month unveiled its first major advertising campaign.

Chidler, a veteran of fashion labels including Timberland and Levi Strauss, was brought in to help manage Cath Kidston’s rapid growth, which has taken place since the company founder, who shares her name with the brand, sold a majority stake to investors TA Associates in 2010. Chidler also brings board-level leadership to the marketing operation for the first time.

The brand last year saw group sales rise by 10 per cent to £116m and profits surge by 19 per cent to £25m. This was primarily driven by the company’s overseas operations, which now account for almost two-thirds of its 160 global stores in territories as diverse as China, Indonesia and Spain.

Kidston remains creative director of the brand she founded 20 years ago in a small shop in London’s Holland Park. The company’s ethos is much the same today and its products remain an eclectic mix of gifts and accessories featuring Kidston’s ‘modern vintage’ designs and floral prints.

The new marketing campaign focuses on the launch of a new tote bag range. Last month, Cath Kidston ran a nationwide cover wrap advertisement on Stylist magazine, and the campaign is supported by social media activity featuring celebrities such as Anna Friel and Jools Oliver (pictured above).

Women are asked to participate in the campaign by stating their preferred bag size and by posting images of what they keep in their bags on social channels. Experiential activity around the campaign is also running at various UK shopping centres this month.

The tote bag launch represents the first integrated advertising campaign undertaken by Cath Kidston. Marketing Week caught up with Chidler to hear about the thinking behind the campaign and the brand’s plans for further expansion.

Marketing Week (MW): Why has Cath Kidston decided to run its first advertising campaign around the launch of a new tote bag range?

Sue Chidler (SC): We’ve never done a specific product launch before – we have always marketed around a new season’s collection. In the past, we used our shop windows, direct mail catalogues, online and PR as the tools to market ourselves.

But times change. We have grown and are at a stage where we wanted to do something more planned and integrated. The product itself is not revolutionary in terms of its shape and function but we have brought the Cath Kidston design elements to the fore and the price point is a fraction of what it would be for a bag by a luxury brand.

We are difficult to categorise as a business and want to bring that quirkiness and element of surprise into our marketing as well. We’ve done that with this campaign by posing a tongue-in-cheek question: Do you like yours ‘totes big or totes small?’ It’s a bit of the cheeky, British postcard humour that we are famous for.

MW: What is the strategy behind this approach to the campaign?

SC: It’s challenging to make a product launch like this exciting – particularly when competing with luxury brands that have multimillion-dollar budgets to support the launch of their new bags.

We have to come at it differently. It wouldn’t be appropriate for us to take part in the beauty contest approach of simply saying “we’ve got a new bag, do you like it?” With this campaign we’re tapping into the fact that women love to be a bit nosy and find out what other people have in their handbags. It’s inviting people to show what’s in their bags and be part of the conversation with us.

MW: Did Cath Kidston bring an agency on board to help with its first foray into advertising?

SC: No, everything is generated in-house. We’re still developing our own tone of voice and getting to know how we want to present ourselves in the traditional route of advertising. We want to feel we are still in control of that and not have something forced upon us by an agency.

We are difficult for third parties to get their arms around because we’re not pure fashion, home or kids – we’re all of it. Cath Kidston is like a mini department store with a particular look and feel. 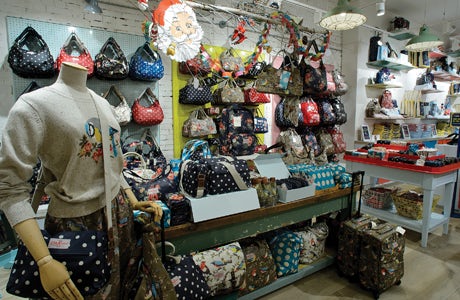 MW: Does this campaign represent a significant marketing investment for the brand and how will you measure its success?

SC: It’s significant because we have never tried to put a campaign together of this type and scale before. Around 25 per cent of the overall marketing budget for the year will go on this launch.

It’s an experiment in terms of the return on investment and all the key performance indicators a brand would ordinarily look at. We have targets in that we know how many of the bags we are forecast to sell without this activity. We’ll see the uplift based on this campaign, therefore, but it will be post-analysis rather than having key metrics in place ahead of it. You have to start learning somewhere.

MW: Why do you think the brand is growing so quickly overseas?

SC: There is a romantic view around the world of what Britain is all about that the brand embodies. That nostalgic idea of Britain travels really well. The other factor is the floral side of the business and being known for floral prints. In Asian markets in particular there’s a natural appetite for that very feminine, sweet aesthetic and the English idea of flowers in the countryside.

We have been operating in the Japanese market for around 17 years, so it’s a trend that has really lasted. We have been in China for only 18 months, on the other hand, so consumers there are at the start of the learning curve. It’s really interesting to see what they’re buying into.

MW: How can you maintain the brand’s values as the business expands internationally?

SC: There’s something very warm and friendly about the brand that we don’t want to lose as we become big. It’s an interesting tightrope that we’re going to have to walk. That’s why it’s important that any advertising that we do reflects our difference and the fact that we have not just become corporate.

We grew up as a neighbourhood brand and were always located slightly off-piste – we were a destination for people. We’re bigger than that now so we do need to be in places like Westfield and Bluewater, but at the same time we’re still opening stores in less obvious locations such as Salcombe and St Ives. We want to maintain that balance.

Chidler’s involvement with Cath Kidston began in 2011 when she was working as a freelance marketing consultant and was hired to advise the brand on future projects. She developed a close working relationship with Kidston herself and was asked to write a book for the company’s 20th anniversary detailing its history. The book, Coming Up Roses, was published last year.

Chidler took on the marketing director role full-time in August 2013 and introduced a new set of brand guidelines to help the company maintain its values and direction during a period of rapid expansion. During its last financial year ending 30 March 2014, Cath Kidston opened 42 new stores, including 34 in markets outside the UK.

The group plans to continue its international expansion at a fast pace. Last year, it entered four new markets by opening franchise outlets in Indonesia, Malaysia and Singapore and its first concessions in France. The brand also launched a flagship store in Shanghai and has begun researching opportunities in the US.

The strategy is supported by private equity investment. In July, Kidston and investors TA Associates sold shares to Baring Private Equity Asia in a deal thought to value the business at around £250m.

Despite this increased corporate influence, Chidler says Cath Kidston will remain true to its values and continue to cater for a broad cross-section of consumers. In addition to store expansion, there are plans for a revamp of the brand’s website early next year.

“In terms of age and social class, our brand is very elastic,” says Chidler. “No matter who you are, you will find something to buy for yourself or for someone as a gift.”