The fashion and homeware brand, famed for its floral prints, has previously focused on direct marketing, using email and its catalogue business to communicate with customers. However, marketing director Sue Chidler told Marketing Week that for the first time the firm is looking to use outdoor and print media to attract new customers

“We’re quite young as a marketing organisation. We have a sophisticated direct mail arm of the business but we have not done traditional advertising so far in the UK.

“We are considering whether we would do more straightforward paid-for advertising to drive footfall to the stores. We can’t expect just to keep selling to the same people,” she said.

Chidler admits that talk about a move into other media channels is still in the early stages. It has already made a small foray, running an insert in Stylist magazine, and will do something similar in the spring to showcase its new range.

However, she admits that a broader marketing push is needed to support its expansion.

“Turning up one time isn’t going to change the world. We need to get people to think about the brand and change the perception,” she said.

The aim of the marketing is to broaden the appeal of the brand, particularly among younger shoppers. Chidler says the brand has good awareness, with Pragma research finding that almost two-thirds of women aged between 16 and 64 have heard of the brand.

However, she said many people still associate the brand with its floral-print bags. While these remain popular, wih its £50 day bag the most popular item in the UK and Europe, it now offers a wide range of prints and products, from furniture to clothing, and is keen to showcase its full range.

“People think we just do floral bags so we need to show off what else we have. People don’t know the full range,” she said.

“We need to understand what people think of the brand and what motivates them and will make us a brand for them. Plus what are the barriers. Is it that they’ve seen too many floral bags on the street and they don’t want to be part of that. How do we show what we’ve got that they don’t know about?”

Chidler says the “ecletic mix” of products on sale at Cath Kidston can make marketing the brand a challenge. However, she believes the retailer has a strong brand based on “modern vintage” with products that have a retro feel but are still relevant and practical.

It will remain true to that brand in any move into print and outdoor advertising, running campaigns that ”feel natural” to the brand and are on message.

“When we turn up, we always try to do it in a slighty quirky, offbeat way that doesn’t feel too forced,” she said.

The marketing push comes as the brand rapidly expands its store footprint following its partial acquisition by private equity firm TA Associates in 2010. It now has 143 stores, up from 118 in March, and two flagships, one in London and the other in Shanghai.

It is aiming to maintain that rate, looking to open new stores in the UK and internationally, both in markets where it already has a presence, including Asia, and new markets such as the US and the rest of Europe.

Sales are also up, topping £100m for the first time in the year to the end of March. UK sales were up 21 per cent while international sales rose 53 per cent.

Chidler is Cath Kidston’s first marketing director, brought on board over the summer to “formalise” its marketing. She has a team of 15 and is looking to increase that number.

She said the campaign around the flagship launch is its first big “connected” marketing campaign, with the firm linking up across direct, social and digital platforms. She hopes the flagship London store will became a destination for people. It has attempted to make it original, offering products and prints that are only available here and it has plans to open its first Cath Kidston cafe downstairs.

”We want people to have a reason to come to this store. The scale of the business now can cope with a flagship and the range is big enough as well. We needed a showcase to demonstrate we’ve come a long way.” 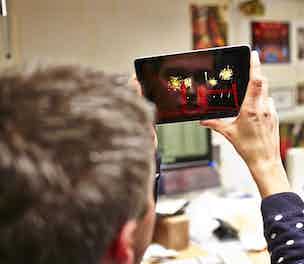