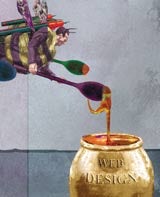 The Government’s latest creative industries report estimates that design consultancy income from the Internet and digital media would more than double over the next year. With many dedicated new media design companies suffering as a result of the dot-com downturn, this should represent a major opportunity for mainstream agencies to cash in.

But gearing up for digital communications was never going to be as simple as just recruiting a couple of 18-year-olds and trailing a few more cables across the office. Many would argue that, quite apart from specific design skills and experience, there is a requirement for different managerial styles and work practices. Beyond that, the technical ability to implement online design can be even more difficult to incorporate into an existing team.

International online specialist Razorfish is among those agencies that have been bruised by the abrupt end of the online boom. As a result, it has announced heavy redundancies. The London bureau had over 300 staff at one point – this is now down to about 50. But Razorfish’s new executive vice president for strategy development in Europe, David Guillebaud, is dismayed by the prospect of traditional point-of-sale (PoS) and digital-to-print design agencies moving into the online arena – and not just because it might pose a further threat to the embattled agency’s business.

Guillebaud says: “I am prepared to accept that a traditional media company, in design or advertising for instance, might decide to start designing for the Internet. But delivering the technical architecture, [platform, hosting applications and maintenance] which goes with that is far more difficult.”

He adds: “There’s a need to ensure that the marketing departments of corporations provide seamless and consistent brand management across both onand offline media. But if I were a brand owner, I’d prefer to have the best people delivering each component.” In the same way, he says, if your roof is damaged, you have the option of calling in a general builder or a specialist roofer.

For its part Razorfish says it is building on its Internet expertise by focusing more on complementary new media, doing design for broadband digital TV and mobile communications. Guillebaud also sees a role for the agency in ensuring that call centres accurately reflect the brands they represent – but not in relation to any of the more traditional media.

Doubts about the long-term viability of Internet-based businesses have not dented the belief of many in design and marketing that online media are driving their offline counterparts, rather than vice versa. One of those is managing director of integrated communications company View, Bernard Guly. He says that the “integrated” tag has been important to View since the company began a move in this direction three years ago. Guly says that before this move View was “a traditional below-the-line design agency”.

Even Guly was not initially aware of the leading role that Web-based communications were assuming. He says: “In fact, all of a company’s communications now point people towards a website, which has become a central hub. This means that the Internet is more of a driving force for the company’s brand than it was before.”

Guly points out that intranets, as well as the Internet, are vital in presenting the brand and putting across internal and external messages. The agency believes that the potential of these interactive media have become clearer over the past year or two and it has been recruiting accordingly.

Guly’s view of who the best people are evidently does not agree with Guillebaud’s. Guly believes that a lot of people using dedicated Web designers have had their fingers burned. He says: “Clients are becoming more discerning about the agencies they use. If you haven’t got to grips with branding and marketing issues, no matter what the medium, in the long term you’re not going to be effective on behalf of your clients.”

Guly says that the implications of integrating onand offline communications, creative and production, into a single studio are that overall knowledge of a brand lies with a single designer. Because of this the agency is no longer pigeon-holed as, for instance, a PoS or a Web specialist.

Another company that has positioned itself to offer across-the-board brand design is Design Bridge. To its graphic and structural design capabilities, as well as corporate branding and literature, the group has added new media. Design Bridge Digital Media was set up in January this year under managing director Phil Ely.

A more recent addition to the team is interactive producer Chris Hartley. He knows about the roller-coaster ride experienced by new media agencies since, as an ex-employee of Razorfish, he has himself been a casualty of it. For Hartley, the digital service has grown naturally from Design Bridge’s wider understanding of branding. He says: “Clients were asking for this service and felt they wanted the group to handle their interactive TV and Internet work because they knew the brand. In many cases, these brands were developed here.”

Hartley says the singed fingers of larger “pure-play” agencies have left the market for digital design looking very different. He adds: “The buzz has gone from the Internet. These agencies started off fulfilling a need that no one else could meet. They combined IT understanding with design.” But now they have lost ground to groups like Accenture and IBM at one end of the spectrum and, at the other, small kitchen-table outfits, which are often able to provide the same services.

The other beneficiaries of this shake-up of the digital design market have been agencies like Design Bridge, which serve the consumer goods market. Hartley considers Guillebaud’s argument about the need for technical mastery and specialisation as spurious. He himself is, after all, living proof of a design company’s ability to successfully import the skills it requires. Phil Ely, with his experience at Granada Broadband, is another case in point.

Not all traditional agencies see the need to bring new media skills in-house. As founding partner of small design company Bluegoose (that “Blue” component seems to be de rigueur in any agency name nowadays), Chris Barrington believes that these issues are too often viewed from the perspective of the larger agency. With just ten full-time staff, Bluegoose does not fall into that category and Barrington considers that, for purely practical reasons, it would not make sense to even attempt to bring Web design skills in-house.

Barrington says:”Many agencies have felt the need to develop these skills themselves. Bluegoose decided that the way to go would be to find outside partners which it could work with. In most cases it doesn’t make sense to integrate these skills in-house. You expose yourself to too many risks. And there are daft considerations, like whether you have enough space.”

But even though the technical input may be outsourced by Bluegoose, the company still demonstrates a capability for taking control of project management on behalf of a client, whether that project is purely Internet-based or across different media. One instance is a career management intranet for BT, aimed at staff leaving the company.

Bluegoose says this co-ordinating function can, especially when it involves new technology, require unfamiliar skills. Barrington says: “The clients Bluegoose is asked to deal with are not necessarily people with a marketing background. They might have been working on databases or IT.” The trick, he says, is to combine design skills with much broader forms of consultancy.

For a partner in a company that has shifted its emphasis from pure design to consultancy-based and verbal work, Barrington seems strangely concerned about “core skills” when it comes to new media work. He says: “There is a danger that traditional agencies will forget what their real skills are. That does not mean that they have to stick doggedly to those skills, but they must not get distracted by work that other people can do better, faster or cheaper.”

The issue of speed is certainly one that many associate with the online arena. Ideas Unlimited is proud to call itself an integrated communications agency, but at the same time it believes that many of the bigger design companies have been unable to produce online material at a speed that satisfies their clients. Ideas Unlimited account director Simon Parkes argues that smaller, more agile agencies are able to do this.

Others point to the radial pattern of many new media projects, with different aspects developing concurrently, in contrast to the linear model of traditional design. Like the differing management and client liaison skills, these approaches have to be a part of the integration process for any design agency aiming to bring onand offline under the same roof.

As in so many other areas, both the specialist approach and the holistic approach to design have a certain validity. What seems clear is that, at some stage, consistency across the different types of brand communication has to be guaranteed. In some cases this lead can be taken by the brand owner, if the in-house marketing skills are up to the role. In other cases, clients may be looking for an agency that can assume more of this management role itself, whether all of the actual technical and design skills come from within that agency or not.

An interesting concept has risen from the burning embers of last year’s dot-com advertising frenzy: pay-for-performance advertising. Being new to the industry, it is sparking debate. Is it a sales gimmick of increasingly desperate online media owners or a new secret weapon for marketers? Marketers must consider whether they want to place their brand in […]

Sportswear company Adidas will launch a new training shoe, called ClimaCool, in March 2002. The shoes include extra holes, designed to reduce sweat by allowing the foot to breathe. ClimaCool will be a premium priced product, costing between 100 and 120 (&£60 and &£75) a pair. A spokesman for Adidas says: “Research has shown that […]

WPP’s acquisition of internal communications agency MCA has put this Cinderella sector in the spotlight. Can it seize the day? asks Justine Storey