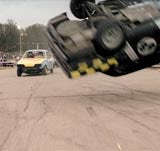 CCHM has created a &£5m television brand campaign for insurance brand More Than, the direct insurance arm of Royal &amp; SunAlliance. It features a family that takes a wrong turn in its car and finds its people carrier is caught up in a stock car race. The advertisements, which break on Sunday (April 18), feature intricate car stunts and crashes. The latest TV activity builds on a new direct response television campaign that broke earlier this month, promoting More Than’s motor, pet and home insurance products – all of which feature brand mascot Lucky the dog. CCHM was awarded the insurer’s DRTV account earlier this year from WWAV Rapp Collins, which continues to produce its direct marketing. Media buying is by Manning Gottlieb OMD.