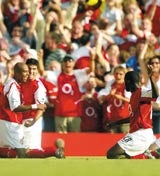 A title sponsor is being sought for a television event that is being billed as the Oscars of the footballing world.

Celador International will market the event, which will give footballers from around the world a chance to vote for their peers in 12 award categories, such as best goalkeeper and two best strikers. It has been organised in conjunction with FIFPro, the worldwide representative body for all professional players.

The 11 players who receive the most votes will earn a place in the FIFPro World XI and the latest technology will be used to give an indication of what the dream team would look like if they were to play together.

Celador Music &amp; Events, a subsidiary of Celador International, is to produce the star-studded event, which is being sold to TV companies around the world.

Celador International has recruited former Fulham FC commercial director Andy Oldknow to seek sponsors for the first of the annual events, provisionally called The FIFPro World XI Player Awards. The main sponsor can negotiate to have its name attached to the event and to use it in promotions.

The event will be held next September in London and attended by up to 1,500 guests. These will include footballers and music stars, who will also perform during the awards ceremony.

Celador International head of marketing and licensing Michael Seresat says: “The event will draw the highest calibre of internationally famous personalities. The fact that the awards are voted for by the players adds a definite gravitas, making it an attractive proposition to broadcasters and sponsors alike.”