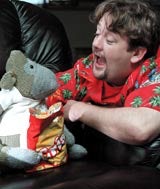 ITV Digital’s Monkey is becoming something of a celebrity. In a case of life imitating art, he is this week being interviewed by national magazines.

“He’s become high profile,” says a spokesman for the Monkey, which was created by ad agency Mother. “Journalists can ask him anything they want. He can even do CD reviews for them. He’s very opinionated.”

According to his official website – alandmonkey.com – Monkey is “of dry clean origin” and is 270g of “grade A stuffing”. He was educated at Oxford and enjoys tae-kwon-do, hang-gliding and Byzantine Art.

Johnny Vegas, on the other hand, enjoys drinking a lot of Guinness and taking his clothes off.