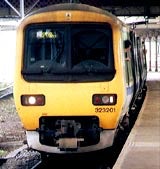 The company, which operates its service in the Midlands, is believed to be looking for a full service agency.

Central Trains does not have a contract with an existing agency, but is looking for one that has previous experience or an understanding of the rail travel market.

The operator’s advertising and promotions usually focus on special offers to students and the off-peak leisure market and is carried out through direct marketing.

But Central Trains is now hoping to reverse some of the negative publicity it has received, along with most other UK train companies in recent months, as a result of delays caused by floods and the Hatfield rail disaster.

Last week Central Train’s proposals for a new train service was rejected by the Strategic Rail Authority. The company had proposed a service between Birmingham and Bristol, but was refused permission after concerns were raised by other transport companies based in Bristol.

No one from Central Trains was available for comment.

Local information source UpMyStreet has been awarded a share of Â£25m worth of Government funding which has been earmarked for the development of better, more accessible local government services through Electronic Service Delivery (ESD).

Electricity company Seeboard Energy is understood to have retained Designate Advertising to handle its £2.5m creative and media accounts, after a final four-way pitch. The review was overseen by Shwezin Win, Seeboard’s marketing communications manager. The company declined to comment about the review. In 1999, Designate Advertising was responsible for negotiating Seeboard’s first foray into […]

Royal & SunAlliance is splashing out £20m on a multi-channel television advertising campaign to promote the rebranding of its consumer division.