Cinema sales house Pearl & Dean has worked with Chambord to rework its ident.so that it celebrates the return of the Sex and The City gang of girls. The brand is using the film to target its target audience of 25 to 34 year old ABC1 women with a quirky ident.

The promotion, exclusive to Pearl & Dean’s contracted cinemas, including the Vue chain, kicks off on 28 May across 350 screens nationwide to accompany the opening of the Sex and The City film sequel.

The spot, appearing before film trailers, begins with a raspberry coloured pop-up of the New York City skyline, followed by moving silhouettes of the film’s four leading ladies.

Replacing the iconic Pearl & Dean asteroid visuals, the famous “pa-pa-pa-pa” ident concludes with the image of a champagne cocktail and the luxurious Chambord bottle.

Charlotte Ashburner, senior brand manager at Chambord says “Chambord is the spirit of fashion so we’re very excited that our first foray in to cinema advertising sees us share a screen with four of the world’s most glamorous women. Like Carrie and co, our audience enjoy shopping, fashion and cocktails and this spot provides the perfect opportunity for us to reach them.”

A host of brands are tying in with the Sex and The City sequel, including Boots and Bauer Media.

Pearl & Dean has just been bought by the owner of cinema chain Empire Cinemas.

What a difference the sunshine makes. I guess that might depend on what you are selling, but in my experience the weather affects just about everything in some way. 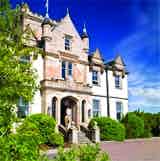 De Vere Hotels and Resorts has appointed Kirstie Yates to the new position of head of marketing.

The Advertising Standards Authority unveils the most complained about advertisements of 2009. Number one, a campaign by the Christian Party that assured people that “There definitely is a God”.